Not to be confused with High Perch. 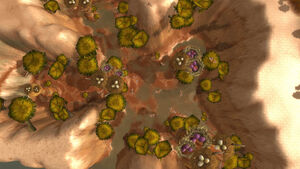 An aerial view of Highperch. 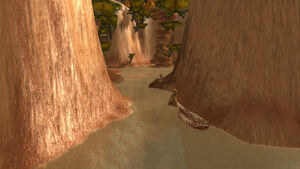 The flooded entrance to Highperch after the Cataclysm.

Highperch is an elevated western area of the Thousand Needles.[11, 37] 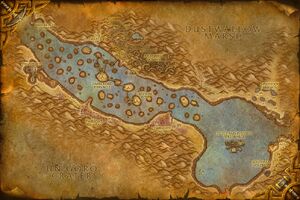 It is home to the proud Highperch wyverns and their nests. Years ago, Pao'ka Swiftmountain became trapped here, but after being rescued he decided that he would come back to ensure their safety. When the Cataclysm struck the flood only had little effect upon the area, the waters entered but just barely leaving a shallow pool on the Highperch floor. Then the Twilight's Hammer came and started capturing the wyverns and those they couldn't they destroyed.

The alpha male, Heartrazor, has been injured and tied down by four Twilight subduers at the back of Highperch. The captured wind riders have been taken to the shelf above Highperch known as the Twilight Aerie where Twilight members have begun using them as their own mounts.

Highperch bestows beauty and magical powers to those brave enough to withstand savage attacks from the inhabitants who protect its secret healing waters.[1]