Highwind Albatrosses are found flying all over the Timeless Isle. They drop no loot, but instead have the unique ability to grab the player who attacks it and then ending combat and resuming its patrol, ferrying the player all around the island. If attacked again, the albatross will lower the player close to the ground so the player can kill it to dismount. This is the only means of reaching some high areas, like Ruby Lake.

Albatrosses fly in a largely counterclockwise loop of the island, but turn inland after flying past Huojin Landing, crossing over the Mossgreen Lake and circling around Red Stone Run before flying back westward over the Celestial Court to get back to the coast. 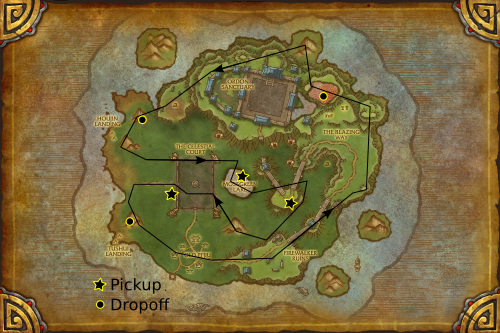 Albatrosses only occasionally get within 30 yards of the ground. Some useful locations include:

Once in the air, there are several locations that only players riding albatrosses can get to, including: