“The Hippogryph is a noble beast, proud and swift. They are an honor to train, and can quickly take their rider a great distance.”

A hippogryph, also called a windgryph,[3] is a beast with the hindquarters of a mighty black stag and the head, wings, and forelegs of a large raven. Antlers rise from its feathered head. They are frequently used as mounts by the night elves, the draenei and the Gilneans. Hippogryphs are highly intelligent, sentient beings; far more than mere "mounts".[4]

Hippogryphs are ancient, magical beasts whose bodies resemble both stags and ravens. They patrol the skies above Kalimdor and viciously attack any enemies of the wilds that they encounter. Most hippogryphs are found in Kalimdor. While a few of them can be found in Ashenvale, the majority of hippogryphs inhabit the south-western Feralas and Azshara. Recently it was also discovered that several hippogryphs live in the northern Howling Fjords.

The intelligent hippogryphs have given their allegiance to the night elves in honor of Cenarius, who stands as the protector of nature and all its creatures.[5] Some say they were created by Cenarius himself as a gift for the night elves. The hippogryphs are wary of other races, but they're intelligent enough to recognize a friend of a friend.[6] In the heat of battle, Night Elf Archers can call upon the mighty Hippogryphs to carry them into the air. The Archers mount the flying beasts and are capable of firing their arrows from the hippogryphs' backs. The brave creatures respond to the female riders as if they shared an empathic bond.[7] Perfectly capable of understanding sentences, they also respond to code sounds. There is also an established code system of tapping the hippogryph's neck, as it is far easier to communicate through touch in driving winds.[8][9] They appear to take pride in successfully navigating difficult conditions, and having the rider commend or acknowledge them for it.[10] Indeed, their intelligence means that they stand a chance in flying such dangerous weather that no mere bird could withstand.[11]

One of the first night elves to speak to the hippogryphs was Dorendil Wildcaller of Suramar, now buried at Tel'anor.[12] General Startalon, interred next to Dorendil, commanded the hippogryph riders during the War of the Ancients and was interred before the Sundering.[13] The Moon Guard have a long tradition of training hippogryphs for battle.[14]

The colors of a hippogryph's feathers may vary, and different hippogryphs inhabit different areas. Feralas-hippogryphs seems to be the most colorful, with either dark blue or purple-pink feathers. Most hippogryphs in Azshara and Howling Fjord are white with brown wings, but Azshara also holds a number of green ones with orange wings. The green variant is also common in Ashenvale (though not found on this location in the game), and thus the type chosen by night elves to be their mounts. The white-brown variant is mostly used as a mount within the Argent Crusade. A few hippogryphs are also nearly entirely white, and seems to be the preferred variant used by the Silver Covenant, high elves who apparently have won the respect of these hippogryphs.

After a harpy incursion in Feralas, several hippogryph nesting grounds were attacked. Hundreds of hatchlings were orphaned, and they were entrusted to the care of the druids on Sardor Isle.[15] The evil effects of the Gordunni ogres affected them and their numbers began dwindling. Erelas Ambersky enlisted the help of Curgle Cranklehop and Alliance adventurers to help retrieve their eggs and move them to Teldrassil. White hippogryphs are very loyal to their riders and the Grand Alliance, while the brown-white ones owned by the Argent Crusade will pair up with the bravest and battle-tested champion.[16] 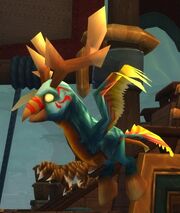 Hippogryphs are tamable by hunters as part of the feathermane family. This requires reading the

[Tome of the Hybrid Beast], which in turn requires completion of the Broken Shore storyline (Legionfall campaign) and the hunter class mount storyline.

A hippogryph in the Alliance Player's Guide.

Contrary to common belief, hippogryphs are not simply domesticated beasts that serve as night elf mounts. They are no less intelligent than most humanoid races, in fact - though they are wary of non-elf races, as kobolds and humans have both attempted to enslave hippogryphs in the past. Most hippogryphs dwell in Ashenvale and other forested regions commonly inhabited by night elves, and have been the staunch partners of the Kaldorei from time immemorial. Indeed, some legends say that hippogryphs may have originally been created by the night elves, or that they were gifts from Cenarius. While kind and generous to their night elf companions, hippogryphs are ferocious and fearsome beasts when fighting any creature they deem hostile.[17]

Night elf Sentinels watch over nests of hippogryph eggs. Likewise, hippogryphs care for the children of the night elves. Though most prefer to stay and protect communities, young hippogryphs taken with the urge to explore and see the forest beyond their nests often serve as willing mounts for night elf windwarriors. Hippogryphs speak Darnassian, but are capable of learning Common and other languages.[17][18]

Hippogryphs have a keen awareness of aerial tactics. Without riders, they attack in quick dives, striking with their beaks followed by swipes with their talons. Female hippogryphs avoid direct combat. If trapped on the ground, hippogryphs charge, trying to get space to regain the air. Carrying night elf archers, hippogryphs make careful circling attacks, darting within range long enough for a shot before wheeling away.[17]

One could find the legendary hippogryphs in Mirkfallon Lake in Stonetalon Mountains, which migrate here from the cooler north. They roost near the lake in cave complexes high on the slopes.[19]

The hippogriff or hippogryph is a legendary creature with the front quarters of an eagle and the hind quarters of a horse, said to be the offspring of a mare (female horse) and a gryphon. It is sometimes seen as a symbol of love, since gryphons and horses are said to be mortal enemies.