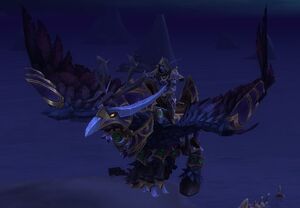 A Kaldorei Hippogryph Rider in Darkshore.

Hippogryph riders are troops mounted on hippogryphs. The most famous are female night elf archers and scouts of Sentinel Army. The brave hippogryphs respond to the night elven riders as if they shared an empathic bond.[1] Most notably, they participated in the War of the Ancients, the Third War, the Ashenvale war, and the Destruction of Theramore.[2] In recent years, other races became hippogryph riders in the ranks of the Argent Crusade during the war against the Lich King and the Silver Hand during the Burning Legion's third invasion.

Riders do not control so much as work in concert with the hippogryphs as they are allies, not pets. Riders' companions judge where and when they need to rest; experienced riders never assume that they know better than the hippogryphs themselves.[3] According to Handler Tessina, properly trained squadron of hippogryph riders can take on nearly any opposing force.[4]