For the tablet, see Hir'eek (object).

Hir'eek in World of Warcraft.

Hir'eek (pronounced high-REEK),[3] the Lord of the Midnight Sky, is a bat loa. He is represented on Azeroth through a champion of his choosing, a position once held by the deceased High Priestess Jeklik. 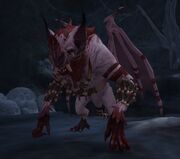 Hir'eek within the Sanctum of Midnight.

Like the other loa of the Gurubashi tribe, Hir'eek was held in Zul'Gurub against his will during the time when the Hakkari were attempting to resurrect Hakkar the Soulflayer.

After the Cataclysm, adventurers in the Cape of Stranglethorn were guided by the spirit of Hir'eek to spy on Zanzil the Outcast's meeting with the Shade of the Hexxer after they placed a Gurubashi Incense at the Totem of Hir'eek.[4]

Before entering the Ancient Passage just prior to his assassination attempt, Vol'jin noticed a flock of bats flying out of the cave. He thought of Hir'eek and wondered if it was a warning from the gods.[5]

After surviving the attempt on his life, Vol'jin conversed with Bwonsamdi and the spirit of his father Sen'jin. During the conversation, he noticed distant laughter that suggested Hir'eek and Shirvallah were enjoying the exchange.[5]

While Vol'jin lay asleep one night weeks later, Hir'eek granted him a vision of the ancient Amani Empire and of Amani trolls sacrificing aqiri captives. When a priest used a knife adorned with loa symbols to rip open an aqir's belly, Hir'eek himself manifested above the altar and breathed in the aqir's spirit, using subtle wing motions to pull more of it to himself and becoming more sharply defined. Vol'jin interpreted this as Hir'eek showing him the proper way to worship the loa. The bat god spoke in Vol'jin's head, telling him that his efforts to preserve the Darkspears had caused him to become separated from the loa. While his body healed, his soul would not unless he returned to the "true ways"; abandoning his history would only make the chasm grow. Vol'jin awoke and asked if returning would make the chasm shrink. Hir'eek did not reply, which the Darkspear chieftain took as a bad omen.[6]

Hir'eek would eventually be corrupted by G'huun and the blood trolls,[7] and subsequently slain by an adventurer with the aid of Jo'chunga and his poison at the Sanctum of Midnight. His death was mourned by the Zandalari.[8][9]

Afterward, Blood Witch Pakkala used her blood magic on Hir'eek's corpse. This was discovered by Alliance adventurers looking to escape the blood trolls.[10]

The corpse was still present when Blademaster Telaamon fought at the sanctum against Rokhan, Jo'chunga, and Witch Doctor Kejabu during the Horde War Campaign.[11]

With the machine of death broken, Hir'eek's soul traveled into the Maw, where he remained until he was rescued by Vol'jin.[2] After being brought to Ardenweald, the Winter Queen took Hir'eek under her care.[12]


He be blind, and so kind.
He brings clarity of mind.


His screech dat you hear,
Can dispel your every fear.


When ya lost and all alone,
In de darkness where you roam,
His voice will guide ya home.[13]

In the Hearthstone expansion Rastakhan's Rumble, Hir'eek serves as the patron of Hir'eek's Bats, a team of sinister troll warlocks, and personally appears as a legendary warlock card. His flavor text reads: "REPEL’S EFFECT WORE OFF."