History of pandaren in Warcraft 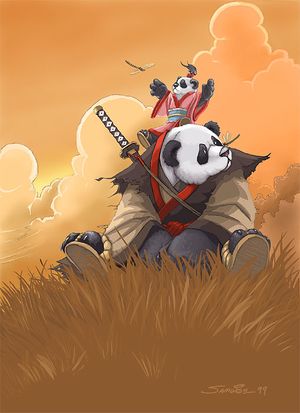 Samwise's Christmas picture that started it all

Blizzard's longtime art director Samwise Didier originally created the pandaren race in his own art. It all started with a picture done for Christmas after the birth of his daughter. Since that first piece of concept art, the pandaren have always been a fan favorite race (combining a heady mix of panda humanoids, eastern-style religions and mythology, and even beer brewing monks) of Didier.[1]

While the pandaren race was originally announced as an April Fools joke for Warcraft III: Reign of Chaos before the game's release, the pandaren would actually find its way into the game as a neutral hostile creep. Unlike the furbolgs, whose model the pandaren shares (with a different skin and icon), there was only a single type of pandaren creep in Reign of Chaos. The pandaren are native only to the Northrend tileset. The undead campaign mission, Digging up the Dead features a hidden pandaren relaxation area which causes a picture of some pandaren to be flashed briefly upon entering it, though no pandaren are actually present. A pandaren also appears in the ending cinematic of the night elf campaign mission, Enemies at the Gate. Finally, the night elf campaign mission, Brothers in Blood features a hidden area hiding The Largest Panda Ever. The pandaren started as a creation of Samwise Didier and an April Fool's joke, but they got a massive response from Warcraft fans. In the first BlizzCast episode launched on Jan. 10, 2008, Samwise recalled the process to the creation of the Pandaren April Fool's page: "But so we put that up in there and everyone was like “Oh my God! A PANDA RACE? That’s kind of cool!” And I’m like “Are you kidding me, really? You want to see pandas in Warcraft III or whatever?”"

When the expansion to Warcraft III was announced, the pandaren brewmaster was added as a neutral hero, available and playable on nearly every melee map. One brewmaster, Chen Stormstout was included as an optional playable hero in the expansion's Bonus Campaign. A squad of pandaren, led by a brewmaster, appears in the Alliance Campaign secret mission as well. Lastly, the official online Blizzard strategy guide had its name (and fictional author) changed from "Marn Thunderhorn's Warcraft III Strategy Guide" to "Mojo Stormstout's Warcraft III Strategy Guide." Thus, by the release of Warcraft III: The Frozen Throne, pandaren were no longer considered a "secret."

In the beta, pandaren wore samurai armor but as the panda as an animal is linked to China rather than Japan, some Chinese players complained and this was soon fixed.[2]

Hints in World of Warcraft 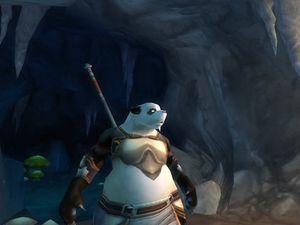 Pandaren fanart disguised as a "leak"

Due to this popularity, pandaren were rumored to be the new playable Alliance race to be introduced in the The Burning Crusade expansion. Their possible appearance in WoW has been hinted at multiple times by Blizzard: 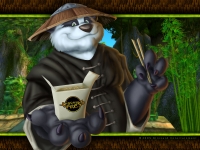 Supposedly, a gaming magazine was brought to Blizzard's offices in the fall of 2005 to view the The Burning Crusade expansion pack for the first time. There were dozens of posters and artwork depicting the pandaren as the new Alliance race. A so-called pandaren screenshot was also leaked, but was eventually dismissed as fake after the draenei were announced. Other gaming sources stated that when "mentioning the ex-April-Fool's-joke Pandaren Empire to Blizzard staff got a surprisingly cagey response..." Blizzard would not confirm or deny these rumors directly until BlizzCon 2011, when Chris Metzen confirmed during an interview with Direct TV that the pandaren were indeed the original Alliance race for The Burning Crusade, but about halfway through the development of BC they were replaced with the draenei.[3] In light of this revelation, the pandaren screenshot might have been a legit leak.

Non-inclusion because of Chinese Law?

Another persistent rumor regarding their non-inclusion in the game is that there is a law in China prohibiting any depiction of violence against pandas, even anthropomorphic pandas, even in a video game. This rumor is, in fact, baseless. Not only does such a law not exist, but there is at least one Chinese MMO that does feature both PvP and a playable race of pandas. During the discussion panel at BlizzCon 2009, it was stated that the Pandaren have not had an increased presence in the game due to legal issues with China. 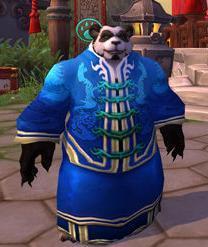 Pandaren as depicted at BlizzCon 2011

On July 28, 2011, Blizzard issued a trademark for the name "Mists of Pandaria."[4][5] Blizzard told GameSpot, "We appreciate your interest in our trademark filings, but we’re not ready to reveal any details at this time."[6] Tom Chilton later said the speculation was "wildly overhyped." He added, "if you look at traditionally how we've handled that race it's been in those secondary products because we haven't realized it in the world. Most of the time when we do anything panda-related it's going to be a comic book or a figurine or something like that."[7]

On October 21, 2011 at BlizzCon 2011, Blizzard officially announced World of Warcraft: Mists of Pandaria as the fourth expansion, and the pandaren became the first playable race available to both the Horde and the Alliance.[8]

After Chris Metzen introduced Mists of Pandaria during the opening ceremony of BlizzCon 2011, controversy ensued, with the WoW community becoming somewhat divided over the expansion. Some players were very positive on the newly added pandaren race, which are basically beer-brewing kung fu-fighting panda bears. Others, on the other hand, seemed to have some pretty negative opinions about the pandaren and the expansion in general introducing also a Pokémon-like pet system and no main antagonist; they seemed to worry about the potentially cute-and-cuddly implications of giant pandas, especially given that the pandaren previously showed up as an April Fools' Joke created by Blizzard for Warcraft III. Other players, who had never heard of the pandaren until recently, believed that Blizzard had in fact based this race on the Kung-Fu Panda franchise, due to the films' popularity, and how well the pandaren in the trailer matches Po's appearance and fighting style in the films.

During the World of Warcraft Story and Lore panel, Metzen was unequivocal about the pandaren and this expansion's place in the greater WoW lore. "This is no joke," Metzen said in response to a question about whether Mists of Pandaria would see more serious story content. "This is not a throw-away silly-silly ha ha funny expansion set; it is absolutely the next vital chapter and as things ratchet up, they’re gonna get really gnarly. There's no way we’re gonna build an expansion set based on an April Fools Joke." During an interview with Game Front, Lead Quest Designer Dave Kosak, who also was on the panel with Metzen, echoed the sentiments that Mists of Pandaria may seem more light-hearted, but it’s just as important to the overall WoW experience as the previous expansion sets. Kosak also said that a playable pandaren race is “by far” the most asked-for World of Warcraft feature among fans.[9]