Hobart Grapplehammer is a famous goblin inventor of the Bilgewater Cartel. He is first seen in the KTC Headquarters on Kezan experimenting with new products. When the place is destroyed by the volcano he escapes with the rest of the survivors to the Lost Isles and then is later found at the Southern Rocketway Terminus in Azshara.[50.5, 74.7]

He will not offer his quests until the player has completed

[13] Befriending Giants and is eligible for

[14] Azsharite Experiment Number One. He will then solicit the player's help. Hobart is also one of the dozens of past NPC's encountered by adventurers to assist in killing the elementals at Sethria's Roost.

During the Burning Legion's third invasion, he traveled to Dalaran where he sells engineering supplies.

During the Fourth War, Hobart was a part of the Horde's forces in Drustvar. After Krazzlefrazz Outpost was established, Hobart joined the Horde adventurer's team as an engineer.[1] 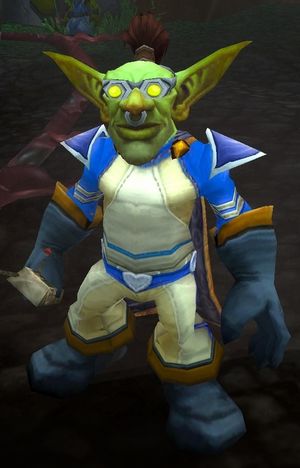 Before the eruption of Mount Kajaro, Hobart was working on two new projects, the Micro Mechachicken and Subject Nine. While on the Lost Isles he designed and built the greatest fighting submersible of all time, the Mechashark X-Steam.

Along with Jastor Gallywix,[2] Hobart developed a massive bomb out of azsharite[3] that would later be used on Thal'darah Grove in Stonetalon Mountains.[4] In Drustvar he created the Wolfercycle, though it quickly crashed.[5]

Veracity of his inventions

He's been advised not to claim he created the gilgoblins by his counsel, due to a negligence case brought up over them. It was also later revealed by Lenu Gillbrack that Hobart's claims of inventing them was a lie.[6] In fact, it seems he may not have been forthright about his "inventions" and is possible he didn't create some of them.[7] 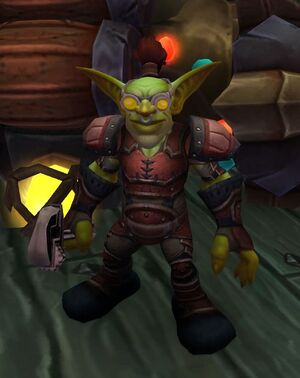 Hobart as he appeared in Battle for Azeroth content between patch 8.0 and 8.3.

Kezan
Good to see you, <name>!
I just wanted to make sure that you appreciate all of the products that my genius has brought to the Kajaro Trading Company?
These include, but are not limited to: Kaja'Cola, the Poultryizer, Town-In-A-Box, my Ingenious Cap of Mook Foolery, KTC Train-a-Tron Deluxe, the Amazing G-Ray, Never-Deflating Pool Ponies, the Big Ones, Warrior-Matic NX-01, and gilgoblins. No strike that last one. Under advice of counsel, I had nothing to do with them.
Anyway, I'm working on a few more things here that I think you'll find interesting, such as the Micro Mechachicken and a little something I like to call Subject Nine.

Kezan, while the volcano is erupting
<Name>?! What are you still doing here?
You have to get off of the island, or better yet, into one of my Town-In-A-Boxes!
Don't wait too long, my <boy/girl>! The Cataclysm is upon us!

These exhanges happen in random order.

Assistant Greely says: Technically speaking, that's not true, doctor. The rocks that fly out of a volcano like Mount Kajaro are called ejecta. It's not the sky. It's molten rock, or tephra. It cools as it decends, becoming lava bombs. Very appropriate, wouldn't you say?

Assistant Greely says: You're going to blow if you don't calm down! Don't you think it was a little bit convenient? The dragon flying over right as the winning field goal for the footbomb finals was kicked into Mount Kajaro?

Assistant Greely says: Yeah, a real party that I was actually invited to. Why does something always happen and I never get to go? I could use a drink.

Assistant Greely says: Hmm, I know I saw it around here somewhere, but are you sure? That thing turns the user into a brute instead of projecting an image of one about fifty percent of the time. And then they explode!

Assistant Greely says: I will, I will. But, Hobart, you have to calm down. Your blood pressure! You're turning deep green!

Assistant Greely says: Right away. I'll flag the Lab-In-A-Box for deployment in Azhara. I'll pack her little cushion in with her, too. She's so cute.

Town-In-A-Box
My genius cannot be contained within a box!
Wait, this isn't Azshara?! What is this place? That's a dormant volcano!
I have half a mind to join the Trade Prince! The other half of my mind is considering the possible weaponization of the clucker eggs!

For dialog with Assistant Greely before takeoff to

Anything worth having is worth fitting inside of a box.

Except people, of course! Can't put <name> in a box, right?

<Hobart gets lost in thought for a moment.>

Anyway, I'm just making a few adjustments here. I'll get this suit back up and running in no time... with a few explosive improvements! 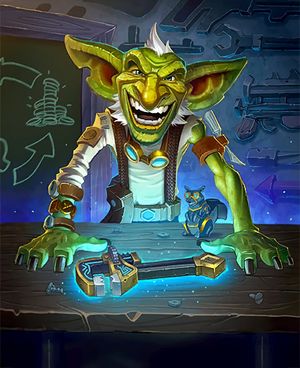 Hobart appears as a legendary card for the warrior class in the Mean Streets of Gadgetzan for Hearthstone. In Hearthstone lore, he has apparently joined up with the Grimy Goons to serve as a weapon inventor and supplier.[8] His flavor text reads: "Grapplehammer is the horrible mind behind the Automatic Piranha Launcher (banned in 7 districts)!"