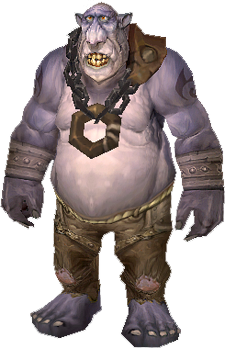 “Ever seen a hobgoblin? They're another vile goblin creation. Take a goblin, make it even uglier, fatter, bigger and stupider and you have a hobgoblin. Add to all of that a nasty mean streak and we've got a problem.”

Hobgoblins, sometimes known simply as brutes,[2] oafs, or mooks,[3] are large, mutated goblins most commonly found guarding goblin settlements, acting as bodyguards or even serving as mounts. They were once regular goblins, but have been altered by some foul alchemy to become tough, powerful, and "dumber than an ogre with a hangover".[3]

The sweat of hobgoblins is considered acidic.[4] They are shown to be affected by kaja'mite just like normal goblins.[5] According to Sky Admiral Rogers, the Dominance Offensive brought in Heavy Mooks in order to hide behind their bodies during the battles in the Krasarang Wilds.[3]

Hobgoblins made their first appearance in World of Warcraft with the Cataclysm expansion. 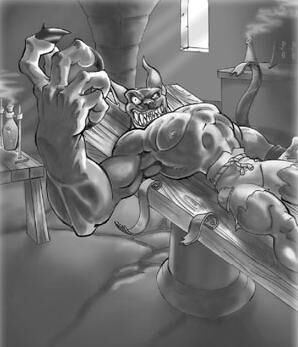 “Those purple-skinned guys. We call them hobgoblins. They were originally goblins, of course, but now they're bigger, stronger and much stupider. They aren't so good at thinking about things, but they make great shock troops. And we don't have to feel bad about sending them into battle on the front lines, because they have a life expectancy of only three years anyway.”

The Alchemists' Union's greatest creations are the dread hobgoblins.[7] Hobgoblins are stupid, brutal troops that goblins created with their mad alchemy. Goblins created hobgoblins by experimenting on their own kind. The alchemically-wrought changes in hobgoblins did more than increase their size and strength and decrease their mental faculties. Perhaps the most well-known fact about them is their short lives. If a hobgoblin lives to his third year, he's ancient. Hobgoblins either don’t realize their lives are pitifully short (which is likely, due to their limited intellect) or they don't care.[8] Hobgoblins can also alter their personal metabolisms, channeling their adrenalin into the muscles that most need it. Their sweat is acidic, and they are capable of bursts of amazing speed that will reduce them to unconscious piles.[8]

One frightening change the alchemy wrought was on hobgoblin emotions and psychology. Hobgoblins are unstable, and their goblin masters find them difficult to control. They have a number of tactics — ranging from the violent to the culinary — to convince hobgoblins to obey, but because of this instability goblins use hobgoblins only rarely. Hobgoblins grunt out phrases in Common and Goblin.[8] When hobgoblins use one of their alchemically-created abilities, they secrete a sticky acid that build up on their skin and eventually becomes coated with this acid. Creatures that touch them or are touched by them are harmed by this acid. If enough of this acid builds up they are capable of shaking themselves like a dog, spraying the acid on nearby creatures. However, this acid is also highly flammable and will burst into flames should the hobgoblin come into contact with fire. The most insane hobgoblins set themselves on fire before entering combat.[9]

Artwork in Art of Warcraft seems to describe "before" and "after" pictures of goblins turning into hobgoblins:

Concept art listed as "Goblins and Hobgoblins Concepts" can be found in Art of World of Warcraft.

Concept art for the Cataclysm expansion when hobgoblin were added in-game: