For his appearance in Stormwind Stockade, see Hogger (tactics).

Hogger, chieftain of the Riverpaw pack, is a level 11 elite gnoll found atop his hill in southwestern Elwynn Forest. His defeat is the objective of a quest for low-level Alliance players.

While Hogger's significance in-game was originally minimal, his relative difficulty at such a low level has caused him to become one of the most well-known and popular minor characters in the game. His role in-game has since been expanded with Wrath of the Lich King and Cataclysm. 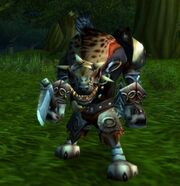 Hogger in World of Warcraft.

A quest from the Westbrook Garrison in Elwynn Forest, near the border of Westfall, offers a reward for Hogger's death. He is an indirect agent of the Defias Brotherhood along with the rest of his Riverpaw pack.

Hogger is a "memory" in the fight against Argent Confessor Paletress in the Trial of the Champion encounter of the Crusaders' Coliseum. This was introduced in patch Patch 3.2.0, "Call of the Crusade".

In Cataclysm, Hogger as leader of the Riverpaw gnolls now has his own hill named after him, Hogger Hill, that he is restricted to. Getting him too far from it will cause him to reset. Rather than being killed, after being defeated he is now arrested and taken to the Stockade in Stormwind City, where he is later faced again by adventurers.

When the Horde breaks into the Stockade, they find a Hogger costume and Kazul, who was imprisoned for impersonating him at some point.

Hogger, King of the Gnolls.

Hogger has a reputation as a particularly dangerous foe, primarily because he is one of the first elite mobs a human will meet. Thus, new players will sometimes underestimate him, not knowing what the elite tag indicates. In classic, this mistake was a recipe for a very quick death.

In recent years he has become a bit less of a threat than he originally was; for most classes, he can be soloed relatively easily. Mages and other cloth wearers may still want to group up though, as Hogger can hit fairly hard. 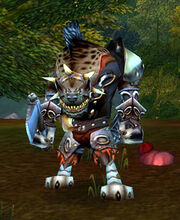 A "Hogger raid" is where many level 1 characters (a full 40-man raid back in the day, nowadays usually no more than 25 persons) attempt to kill Hogger by zerging him. Level 1 players can no longer form a raid group.

Hogger is also used as a joke when it comes to where loot drops. Many people will jokingly say that items such as [Atiesh, Greatstaff of the Guardian], and [Thunderfury, Blessed Blade of the Windseeker] are rare drops from Hogger. Keep in mind that Hogger has no extraordinary loot, and these claims are false. Hogger is also often referred to as an extraordinarily difficult mob on par with other raid bosses, which has no basis in fact and serves only to glorify him.

In almost every respect, the cultural icon of Hogger far exceeds that of the actual in-game character. Hogger is often aggrandised in jokes traditionally featuring Chuck Norris. With the introduction of the statistics system, the number of times the character has been killed by Hogger is specifically listed in each player's statistics pane, even for Horde characters.