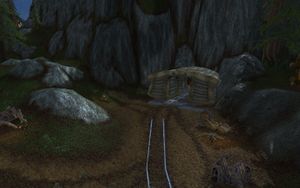 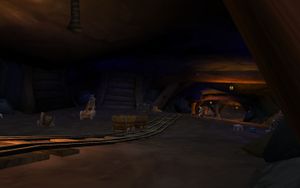 is located a very short distance northwest of Westfall Brigade Encampment in Grizzly Hills. The miners and workers there were once affiliated with the trappers but through their opposition to the Wolfcult which had tried to recruit them, they paid the price with their lives. However, it wasn't as clean and definite as a swift death. Arugal transformed the entire population of the mine into undead, and they continuing mining.[1] The only apparent survivor of the disaster is Petrov, who seeks justice and the peace of real death for his comrades.

The mine complex consists of three wooden houses and the tunnel itself. A railway leads into the mine. The closest known trapper outpost is the Heartwood Trading Post, however, it is currently uninhabited.