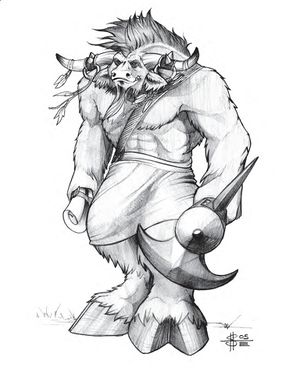 The nomadic tauren gave the world the first holy strider. Constantly on the move, the tauren had to have reliable scouts able to go far ahead and return swiftly. If they ran into trouble, they had to take care of themselves, either talking their way out of things, fighting their way out, or simply running and hiding. The holy strider tapped into the world's readily available energy and began harnessing that magic to aid their travels.

Now, although the tauren have their own well-fortified homeland and capital, the holy striders still find themselves in high demand as messengers, diplomats, spies and explorers. Lanky and tall, nearly all holy striders carry minimal equipment, relying on nature, their own resourcefulness, and the kindness of strangers to aid them.

Along with shamanistic traditions, the tauren brought the secrets of the holy strider to the Horde, and its followers have spread. Once dominated by the tauren, the holy striders are now represented by trolls and, to a lesser extent, orcs and a handful of Forsaken.

Holy striders are well-respected among the Horde. Although they are not spellcasters, their mastery of the environment is said to be inspired by nothing less than the divine. Thrall himself employs four: two orcs, one troll, and one tauren. Rumor has it that he is looking for a neutral holy strider to make Horde negotiations with other races go more smoothly, but there are no holy striders outside the Horde at present. Cairne Bloodhoof employs only tauren, out of respect for the long heritage of the holy strider. Although his demeanor does not suggest a covert mind, Cairne does not disclose how many holy striders he employs, only that they are all tauren.

The orcs have followed the tauren lead and record the farthest each holy strider has traveled. The Horde has created its own maps of Kalimdor based on its holy striders' reports, and it rewards them well. It is not difficult for a holy strider to receive work, whether it be from a noble lord or a goblin merchant. She has only to bear a letter confirming her longest run, and most employers will be satisfied.

Holy striders commonly work alone, as few can keep up with them, but they serve as exemplary party leaders with their natural charm and diplomatic skills. Their genial manners allow them to talk a party out of tense situations, and they are certainly useful for checking out a dangerous area quickly.

There is no centralized training center on Kalimdor for holy striders, but most major cities have apprenticeship programs. Often a holy strider who has been injured or is past her prime will train some new recruits. Apprentices approach the mentors with great honor and reverence, as they hope to someday be as great as those who have seen the different corners of the world.

The kind of person who takes up the mantle of the holy strider has a never-ceasing curiosity - someone who will never be satisfied with stopping before the next hill. She must always see what comes next. Her eclectic skills turn her into a well-rounded character.

The holy strider can cover vast distances by meditating while running. Her meditation moves her mind into the ground beneath her feet, where she coaxes it to fold upon itself while she is running. This effect only works for the holy strider herself; no party members can benefit from these abilities. The meditation cannot be used during combat. After settling into a comfortable, meditative run (1-1/2 times her walk speed), the holy strider can begin manipulating the terrain under her. This causes her to run at twice her maximum run speed while still managing to keep the easy run. She can keep this up for a number of hours before she becomes fatigued and must stop the creasing run. To the observer, she seems to move in unnaturally long strides or jumps. The holy strider cannot attack and maintain the run. While creasing the mountain, the holy strider can run at her normal run speed up or down any grade of 90 degrees or less as if it were 45 degrees. If she fails, her meditation ends and she must make a Climb check to find something to grab onto, else she falls. Once she has mastered solid land, the holy strider can reach beneath the waters of the seas and crease them, creating a solid foothold. After achieving the necessary meditative state, she run across water, though she moves only at her normal run speed. If she stops her meditation, she falls into the body of water. If she takes damage while creasing the sea, she must make a Concentration check or her meditation ends and she falls into the water.

When the holy strider wishes to enter a room with flair, she can easily get the attention of anyone she likes with the force of her personal charm. She is a powerful negotiator and no one can rival her persuasive skills. The holy strider's job is part scout, part diplomat, part spy. Her job is to reach her destination as quickly as possible and then meet with — or spy on — her target. She is highly trained, but sometimes things don't go as well as hoped. In these cases, the holy strider must rely on her skills to get out of the situation as quickly, efficiently and safely as possible. A holy strider can use shadow meld as a spell-like ability.[1]