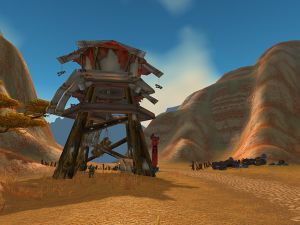 Honor's Stand prior to the Alliance takeover.

Guarding the west road between Sun Rock Retreat and the Crossroads, Honor's Stand once consisted of a number of burrows, some badly damaged, as well as watch towers. In the past, it had been the location for many great battles between the Horde and its enemies. The orcs stationed here, including peons tasked with repairing the buildings, were very much conscious of the outpost's illustrious, if short, history, though recently they had been beset by attacks mounted by the Kolkar centaurs.

Allegedly prior to the Cataclysm, in a clever ruse, the Alliance forces streamed out of Northwatch and marched up the Gold Road, besieging Crossroads as dusk fell. Then, in the heart of the night, they force-marched southward, leaving their campfires burning behind. The meager forces at Honor's Stand were caught unaware as the Alliance poured through the pass at dawn's first light. Many of the Horde's bravest warriors fell before their blades.

The Horde regrouped east of the pass and prepared a counter-attack, but the next day, the skies reddened and the land was cleaved in two. The Alliance in their makeshift bunkers were surprised and disorganized as the Horde from the disaster, but rather than using the perfect opportunity to attack, Warlord Gar'dul ordered that they pull back to the south to refortify.

Not all the Horde soldiers left, however, and remain to do sneak attacks from the high ground and retreat before the Alliance know what hit them.[1]

With the Horde having backed off the Alliance have quickly started fortifying the area with towers and walls to easily defend it from future assaults. A few orcs that surrendered after watching their commander get killed were taken prisoner and placed in the southern tower that had become a crude prison house with Captain Peake watching over the prisoners as its warden.

Soldiers of the Alliance and the Horde can be found to the west and east of the outpost fighting. Horde adventurers wishing to access the Southern Barrens from Stonetalon will usually take the High Road to avoid the carnage below.

During the Fourth War, Honor's Stand was besieged by the Horde champions.[2]