Honor Hold is the primary Alliance town on Hellfire Peninsula. A refuge of human, elven, draenei and dwarven explorers, Honor Hold is the first major town Alliance explorers will encounter while traversing Outland. The town holds a flight path, inn, keep, destroyed barracks, mage tower, stables, blacksmith and a variety of profession trainers and vendors. Vestiges of the Sons of Lothar, veterans of the Alliance that first came into Draenor, have steadfastly held on to this Hellfire outpost. They are now joined by the armies from Nethergarde Keep, Stormwind City and Ironforge.

The settlement was originally founded as the primary base of the Alliance Expedition under General Turalyon. The hold was under siege for several months, until the Alliance forces staged a successful attack on Hellfire Citadel. After the Dark Portal was destroyed, the Alliance forces returned to Honor Hold to begin their new life in Draenor - now Outland.[2]

The Stair of Destiny

To make the best use of available resources, it is recommended that you grind reputation with Honor Hold through Hellfire Ramparts and Blood Furnace. If Revered or Exalted is your goal it is recommended that you save your quests in Hellfire Peninsula until the later parts of Honored or Revered. The Honor Hold quests grant a total of 10,785 rep points for non-humans (11,863 for humans). So if you save every single rep-granting quest (including

[61] Through the Dark Portal) until after hitting 5999/6000 Friendly, then by the time you're able to run Shattered Halls, a single non-heroic run should put you at Revered.

Gaining reputation through Revered and Exalted requires access to Shattered Halls, which requires level 68 and the ability to open the locked door via the key quest or a lockpicker. After receiving the Heroic key for attaining Honored, the grind to Exalted can also be helped by Heroic runs at any of the Hellfire Citadel instances.

Due to the lack of representatives in other areas, there is a large gap during which you may not attain any Honor Hold reputation from questing and killing mobs in Outland once you depart Hellfire Peninsula. Until you are able to gain reputation within Shattered Halls, you may wish to focus on grinding reputation with other factions as you level.

[60P] Hellfire Fortifications. This method rewards 150 reputation per day, and can be done all the way through Exalted. This quest also rewards the player with 3x [Mark of Honor Hold] that can be used to buy PvP gear from the quartermasters in Honor Hold and near Telredor in Zangarmarsh. Marks earned during PvP may be spent on [Honor Hold Favors]. These flags will increase your reputation gain by 25%, increasing the value of a Shattered Hall run to ~2000 reputation. 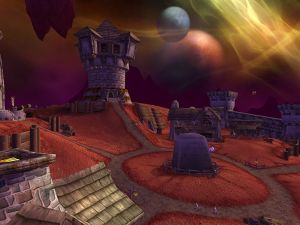 The Honor Hold Inn features a mailbox outside; there are a variety of vendors, professions trainers, and various NPCs including:

Below Honor Hold (to the west, immediately below the town) are the Honor Hold Guard Tower and Mine. 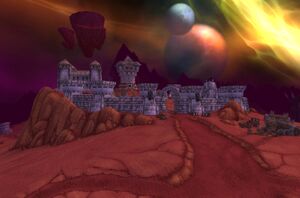 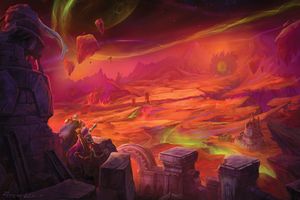 Alleria and Turalyon overlooking the peninsula from Honor Hold