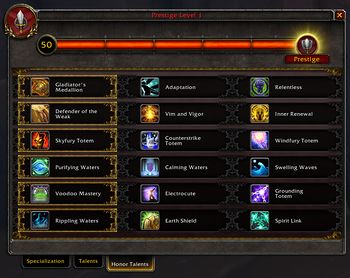 The Honor System is a way for players to gain unique abilities, rewards and recognition from engaging in player vs player (PvP) activities. Introduced with World of Warcraft: Legion the Honor System is a replacement for the past system where Honor Points were used as a currency for PvP Gear.

One major feature of the Honor System is the Honor Talent Tree, available at Level 110. Honor now functions as a form of PvP experience, allowing players to progress through 50 Honor levels. As they increase in level, they'll unlock unique abilities known as "honor talents", specifically designed for PvP combat. The Honor Talent system is built very similarly to the main talent system, with six rows of three talents. However, rather than unlocking an entire tier at once, players will unlock talents from top to bottom, starting with the left column. This ensures that players will gain far more regular bonuses from gaining rank; the first six unlocks will grant entirely new talents, while later unlocks will each make one new talent option available. It also allows players to very quickly reach the maximum overall power for their character, with subsequent ranks serving only to offer potentially more desirable alternatives to their current PvP talent choices.[1]

The first row of Honor Talents are unlocked at Levels 1, 2, 4, 6, 8 and 10. The second and third rows are unlocked every three honor levels after (13, 16, 19...) with the final talent unlocking at level 46. Levels that do not unlock talents instead grant Gold or

[Glory of the Melee].

Honor Talents are permanently unlocked, and no longer reset when a player gains a Prestige Rank. 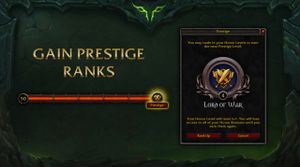 Prestige Ranks, also Prestige levels, is the rank system part of this new honor system. Once the player has reached Honor Level 50, they will automatically be granted a Prestige Rank. The player will gain access to new cosmetic effects and vanity options associated with that Rank.[1]

Rewards include achievements; portrait badges, that are shown beside the character's portrait; unique mounts; and unique PvP Artifact variants, one "look" for each Artifact will only be available through the prestige system.[1]

After reaching Prestige Rank 1, players will always be rewarded either Gold or Glory of the Melee for reaching a new Honor Level. The max prestige rank is 25 at honor level 50.

The prestige ranks were removed with the new simplified system in Battle for Azeroth. 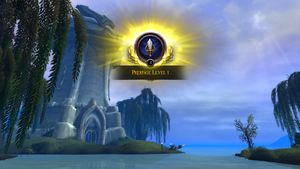 The new honor system is intended to heavily reduce the importance of player gear in PvP play. Prior to the new system, gear significantly determined player power, survivability and effectiveness in PvP combat. For example, in Patch 6.2, a character with the top item level 700 conquest gear was 80% more powerful than a character with the item level 620 introductory honor gear. This power gap had long been complained about by some players, and by the time the new honor system was revealed in August 2015, was described by the developers as "just not that fun", and not "feeling right" for PvP.[1] An alternative gear-independent arena system, Trial of the Gladiator, had been previewed at the announcement of the previous expansion, Warlords of Draenor, but had been removed during the expansion's alpha.

In the new system, the significance of gear will be heavily scaled down, with the best gear in the game providing perhaps a 7% advantage over a character who has just reached max level. This aims to still provide some satisfaction from acquiring new gear, but to for the most part remove the significance of gear from PvP, returning the focus to playing ability as well strategic options such as talent choices.[2]

As well as reducing the importance of gear, the new honor system will also see the complete removal of PvP gear itself. Prior to this players would earn Honor points and Conquest points through PvP activities, which they would spend on special gear, providing additional perks in PvP combat. With the new system, players will no longer earn currency from PvP, and will no longer need to equip separate gear to engage in it. PvP stats such as resilience will also not be present moving forward.[2]

Perhaps the biggest change with the introduction of the system is the introduction of the first true PvP talents. This separation of PvP and PvE was one which had long been requested by many players, especially those focused on PvP. The division is intended to finally allow the designers to create two different versions of the classes, allowing for far better balance in both arenas. Previously the developers had repeatedly expressed reluctance to divide the two game modes, creating a major limitation on the "design space", and thus impacting balance and freedom of design in both modes.

The PvP talents also serve to replace the effects of trinkets, set bonuses, enchantments and gems, all of which will no longer be active in PvP.[3] The impact of PvE effects such as these in PvP had long been a source of complaints from players, as well as a common problem and limitation when designing new effects. Their removal is expected to dramatically reduce unpredictable burst damage, making sustained damage more important.[3]