For the Horde from that period from the main universe, see Old Horde.

For other uses, see Horde (disambiguation).

The Horde, or the Orcish Horde,[1] was created when several of the orc clans of Draenor rallied together under the orc warlock Gul'dan, in the face of the hardships (longer winters, short springs and summers, a shortage of game to hunt) plaguing the land. While the chieftains still hold sway over their own clans, each individual chieftain answers to Gul'dan.[2] The Horde also has a Warchief, a position held by Blackhand until his death; its ownership is currently uncertain.

Like many orc clans, the Horde has no tolerance for weakness, and the penalty for failure is death.[3] Despite the fel bloodlust raging in many, the orcs of the Horde still honor many orcish traditions, such as the mak'gora.[4]

The Horde gather on Draenor

Gul'dan traveled to the various clans with his slave Garona, promising a way to travel to a new, healthy land, where food and water would be plentiful. The Warsong clan were one of the first to join, having been promised new enemies to battle and a new land to conquer.[5] Enemies were not mentioned to the less battle-hungry Frostwolf clan, who nonetheless turned Gul'dan down twice before accepting his invitation; they were the last clan to join the Horde.[5] Even the Red Walkers were invited, but refused, and would later be destroyed during the war between the Red Walkers and Frostwolves. Gul'dan did not take rejection kindly, having poisoned at least one chieftain who turned his offer down.

Though the clans initially quarreled, in time the fighting stopped, as each took to sharing what they knew, and unity between the orc clans began to form.[6] Blackhand of the Blackrock clan was chosen early on to lead the Horde as Warchief.

Guided by Gul'dan's magics, the Horde gathered at the location of an ancient artifact buried deep beneath the sand. They eventually excavated the massive structure, a "Great Gate" that would allow them to enter their new world.[5]

By the time of the opening of the Great Gate, the Horde had been in existence for a number of years, and had seen many power struggles, eventually establishing order and rankings throughout the Horde.[3]

The Horde camp on Azeroth

Gul'dan opened the Great Gate for the purpose of sending the Horde to invade Azeroth. An initial warband traveled through the temporary gateway to the Black Morass, from where Horde hunting parties began razing human settlements in the surrounding regions and taking prisoners, needed to fuel the ritual to open the Great Gate permanently. This aggression roused the wrath of the human of the Eastern Kingdoms, leading to a larger conflict with the army of Stormwind at the foot of the Great Gate.

Despite heavy losses to the unknown dwarven boomsticks, the Horde was ultimately victorious in defeating Stormwind's forces. At the climax of the battle King Wrynn was slain by the half-breed slave Garona Halforcen, resulting in her being welcomed into the Horde as an orc.

However, despite their victory in battle, Gul'dan's was unable to complete his plans to open a permanent gateway, leaving the remaining Horde behind on Draenor for the time being.

Prior to the battle at the Great Gate, Gul'dan had learned of Durotan's betrayal of the Horde, and consequently exterminated the clan, although a few members escaped. The next day, Gul'dan was challenged in mak'gora by Durotan. The warlock successfully defeated the chieftain, but did so by using his fel magic, sparking dissent and accusations of cheating from some of the gathered orcs, including Orgrim Doomhammer. However, after effortlessly destroying several of those who spoke against him, the others quickly fell into line. Following the victory of the Horde in the following battle, Gul'dan's hold over the Horde appears to be intact for now. 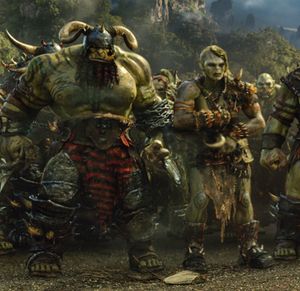