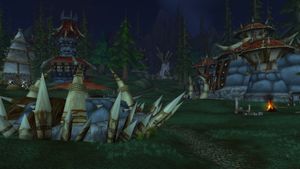 The Horde Encampment seen from its entrance. 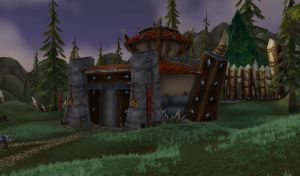 The barracks of the encampment.

The Horde Encampment is located in the Hyjal Summit area during the Battle for Mount Hyjal. It is traveled to after the Alliance Base falls. Here, Kaz'rogal and Azgalor are fought with the help of Thrall.

The base is made up of buildings and units inspired by how they were in Warcraft III. Its wooden palisade leads into an entrance protected by watch towers and a burrow. There are also a stronghold, barracks, a kennel, several jungle troll huts and tauren tents probably intended to respectively represent a voodoo lounge and a spirit lodge, as well as several tauren totems. Several other orcish buildings are also scattered in the encampment.

The base is populated with grunts, headhunters, tauren warriors, witch doctors, shaman and peons. As more nods to the RTS, the shaman have their Lightning Shields activated and most of the troops are colored in red. Some buildings are also seemingly upgraded with spiked barricades.