The Horde navy is the collective maritime military force of the various members of the Horde. As the naval wing of the Horde military, these combined navies protect the Horde's interests throughout Azeroth and beyond, and have seen particularly frequent service against the Alliance and its navy.

Warchief Thrall's new orcish Horde escaped the internment camps of Lordaeron in stolen ships from the Alliance of Lordaeron. In fact, throughout the entire Third War the Horde would produce little to no ships of their own, instead hiring mercenary transport boats from goblin shipyards when necessary.[1] However, after the second invasion by the Burning Legion had ended, the Horde could instead focus on expanding their presence on land as well as on sea.

The Cataclysm led to the war against Deathwing, in which Warchief Garrosh Hellscream ordered the Bilgewater Cartel to build an armada that he would name Hellscream warfleet, hoping to use it to persuade the Dragonmaw clan to ally the Horde.[2] However, corruption and delays in Bilgewater Harbor meant poor quality despite high costs,[3] but intimidating the Bilgewater Foreman in charge helped get the warfleet done in time for the Horde to successfully launch an incursion into the Twilight Highlands.[4] The Warchief, on board the warfleet, ordered the Horde air guard to seize the opportunity and attack the Alliance armada while it was in close formation. Though the Alliance apparently inflicted heavy casualties,[5] the fleet was left seriously damaged following this ambush. The Horde's zeppelins too would pay for the sudden attack, when they were soon afterwards wiped out by a group of twilight dragons led by Deathwing, having dispatched all their close air support to deal with the Alliance.[6]

Captain Skullshatter commanded the gunship Storm's Fury into Deepholm where it was shut down and crashed.

During the Attack on Theramore Isle, the Horde erected a naval blockade around Kalimdor,[8] with the Warchief's Fist engaging with the Alliance ship Elwynn.[9]

Later, the Horde navy was victorious at the coasts of Tanaris and Tol Barad. A southern fleet encountered an Alliance envoy and an uncharted landmass.[10]

Garrosh Hellscream sent Admiral Hagman to control the Horde fleet confronting Admiral Hodgson of the Alliance in a battle on the High Seas. 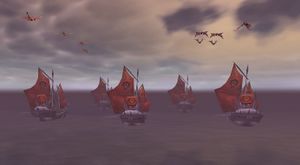 At the start of the third invasion of the Burning Legion, Horde navy assaulted the Broken Shore.[11]

Alliance with the Zandalari

After the Argus Campaign, too many of the Horde navy's ships were destroyed either by the Legion or by the Alliance. Warchief Sylvanas Windrunner had Horde dockmasters working overnight.[12]

During the Blood War, much of the Horde's naval power was docked in the Echo Isles. Alliance champions were sent to infiltrate the troll capital, and set fire to the ships.[13]

The Horde fleet grew a great deal in size after the Zandalari trolls introduced their Golden Fleet to the Horde. However, it was almost entirely destroyed by the Alliance during the Battle of Dazar'alor as the ships had been sabotaged and later detonated.