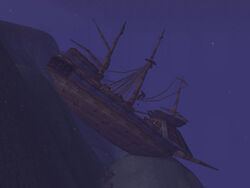 The Horizon Scout lies at the bottom of the ocean.

The Horizon Scout is a shipwreck located in the Ruined Reaches south of Azshara. [51, 107.2]

Captain Vanessa Beltis is stranded on the southern peninsula of Azshara, but Roland Geardabbler and several Horizon Scout crew members appear to be trapped aboard the ship with Roland keeping everyone alive by channeling some type of water breathing aura, which is visible around himself.

In the stairwell of the forward section, there appears to be a small chunk of Azsharite on the floor, which may or may not be part of the reason for Horizon Scout's sinking. Though it was mostly likely the nearby naga that sank the ship to prevent them from leaving so they could find what they were looking for from the humans.

The ship itself was unique in that the interior is designed unlike any other ship models currently in-game. However a number of sunken ships in Kelp'thar Forest now have this model.

Since the Cataclysm, the shipwreck is still present, but the crew have vanished. Also, the nook where Beltis and her landed crew are located appears to no longer exist, due to the reshaping of the zone by the goblins - or Deathwing.

The crew of the Horizon Scout.

These are the passengers the quest

The area was most likely intended to be similar to that of Faldir's Cove in Arathi Highlands, in that both factions could help a group of trapped sailors from the hostile nearby naga, but rather than waves of naga appearing at the end of the chain the naga would come in waves to open the chain of quests. However, it was abandoned and only the quest