[Horn of Cenarius].
For the trinket, see 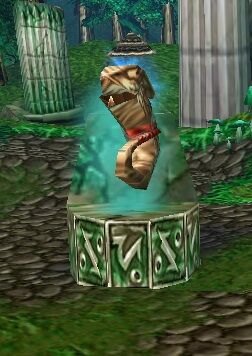 The Horn of Cenarius was the horn of none other than the demigod Cenarius.

This ancient relic of the Night Elves is said to hold the power to call the spirits of all Night Elves. It imbues its owner with 200 hitpoints, and a 2 hit points per second regeneration bonus.

The horn was used by Malfurion some time after the Sundering. The archdruid commented that the horn could not pacify the elves trapped in the Pack Form.[1]

Malfurion holding the Horn of Cenarius on a statue.

After his death, it remained on Moonglade Isle and was guarded by the Primal Guardians. It was retrieved by Tyrande and used to awaken Malfurion Stormrage, and then later used by Malfurion to awaken both the Druids of the Talon and Claw. Following the Battle of Mount Hyjal, the Arch-Druid blew the Horn again, summoning the power of nature to destroy Archimonde.

The horn made a comeback many years later, when the forces of Ragnaros assaulted Mount Hyjal. It was used to call Goldrinn and druids of the Guardians of Hyjal to assist in defeating Azralon the Gatekeeper.

The horn was originally used by the demigod Cenarius to call upon the powers of nature. Since druids are in tune with nature and represent it, the horn also effectively works as a wake-up call to them.

According to legend, this powerful item had the power to call upon the spirits of all night elves. Although Cenarius normally kept his horn for himself, he loaned it to others on occasion. According to tales, the horn has other powers besides awakening the night elves. A rumor hints that the horn's bearer will gradually be turned into a night elf if he carries it for long, but as only night elves have possessed this item for any length of time, this legend cannot be substantiated.

When Cenarius perished, the location of his magical horn was lost from the ken of the mortal races. Although many have searched for it, none had discovered its location. Rumors suggested that the forest itself claimed this lost artifact for all time, and yet it one day may again appear when the need for it is great enough.[2]

It was gained by Tyrande in The Awakening of Stormrage, and used to awaken Malfurion. Malfurion uses this in The Druids Arise, Brothers in Blood, and Twilight of the Gods which are chapters 4, 5, and 7 of the Warcraft III night elf campaign, Eternity's End.