Horn of the Vicious War Wolf 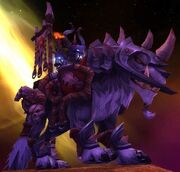 This item is a reward from the achievements:

Note that this mount is not account-wide, but it can be mailed between characters. Thus, the character that wishes to use the mount must individually learn it.

Additionally, the mount can be purchased for a

[Vicious Saddle], awarded for completing the

After completing the achievement you will receive an in-game mail from Garrosh Hellscream which contains the mount:

How many Alliance heads have fallen into the dust by your hand? How many victories won, enemies crushed, battlefields taken?

The eyes of Hellscream have been upon you, and they are pleased. Ride on proudly, for the Horde!

At Warchief Hellscream's command, Horde trainers began raising wolves to thrive in the shock and ferocity of sustained combat.