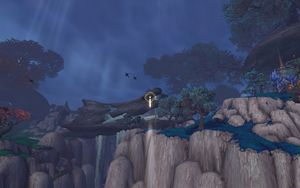 Shooting swarmers out of the sky

We're about to get hit hard...

Pick up that cannon there and lend a hand, if you would. There will be no shortage of targets.

I could really use you on that cannon...

I'm pretty sure that big bug survived the fall though...

Interact with Nurong's Cannon, next to him. It has one ability:

Plenty of Kor'thik Swarmers in the air. The projectile's travel time is nearly instant, so don't bother leading the target. Once fifty have been killed, Voress'thalik spawns.

Hawkmaster Nurong says: What... what is that thing? Is it really trying to fly across?

It has 8 million health, so it will take several shots to knock it out of the sky.

Hawkmaster Nurong says: Nice work! Let's get down there and finish it off.