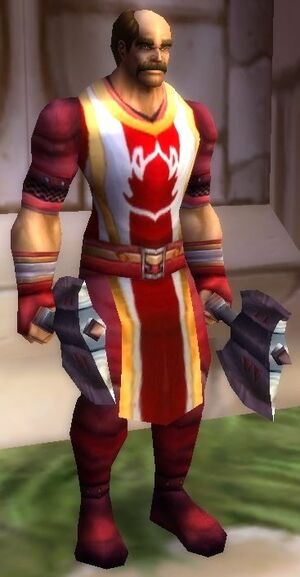 Houndmaster Loksey was a level 34 elite human mini-boss who was once located in the Scarlet Monastery's Library wing.

After his death, his soul entered the Shadowlands and was sent to Revendreth and placed under the care of The Fearstalker in the Forest Ward due to the atrocities he committed in life. It was noted on his sinstone that as fear was his weapon in life, fear would be his teacher in death.[1][2][3][4][5]

Houndmaster Loksey is one of the four leaders of the Scarlet Monastery, and captain in charge of training the hounds which the Scarlet Crusade use to track down their enemies. Loksey commands the loyalty of fearsome dogs that can tear their victim apart limb by limb within minutes.

He is the brother of Huntsman Leopold, a Scarlet emissary sent to Light's Hope Chapel as part of the Scarlet Crusade's reluctant alliance with the Argent Dawn. When speaking to him, Leopold is of the opinion that Loksey can't even take care of his own hounds, let alone represent the Crusade - which is why Leopold was sent instead of Loksey.

Houndmaster Loksey comes with 3 elite Scarlet Tracking Hounds. They are vulnerable to all forms of Crowd Control that work on beasts. Generally, one hound is polymorphed by a mage, the tank holds aggro on Loksey, and DPS focuses on the other hounds until all are dead, at which point the party focuses on Loksey. AoE abilities can also help bring the hounds down. If the previous room has been cleared,

[Fear] can also be used safely as the hounds are unlikely to draw other mobs into the fight. Loksey will enrage at 25%.

[33D] Stripping Their Defenses and