For the instance, see Hour of Twilight (instance). For the patch, see patch 4.3.0. 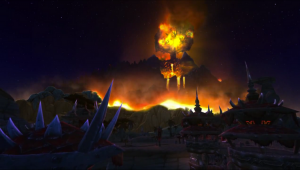 The Hour of Twilight, as revealed to Thrall by Ragnaros.

“The sun has set on this mortal world, fools. Make peace with your end, for the Hour of Twilight falls!”

The Hour of Twilight is the fulfillment of a chain of events instigated by the Old Gods many aeons ago. It is prophesied as the moment when the Old Gods will finally be freed from their ancient prisons, and will return to end all life on Azeroth.[2]

A very ancient prophecy speaks of the Hour of Twilight--Azeroth's final moments of existence. At the last sunset, the Old Gods, sealed away within the depths of the world long ago, will enact their judgment and irrevocably twist the mortal world to reflect their essence. On Draenor, the Pale orcs received a prophecy of the Hour of Twilight from the void lords: a time when the shadow would envelop the universe and snuff out all life in existence.[3] When the Pale, as the Twilight's Hammer clan, arrived on Azeroth during the First War, they immediately sensed the Old Gods and realized Azeroth was the place where the prophecy would occur.[4]

The Dragon Aspects were created to stop such an event from occurring, where they would give their powers to prevent it. Using this to their advantage, the Old Gods corrupted Deathwing as a way to make their plan "foolproof", using one of the very aspects destined to stop the Hour of Twilight, to instead usher it.

It possibly started with the reopening of Ahn'Qiraj, when the Old God C'Thun stirred from its slumber beneath the lands of Silithus. A chain of events is set in motion where the Old Gods are rising, their ancient machinations are finally paying off, and Deathwing is their greatest pawn upon the board. While the insane Aspect believes himself to have his own purposes, his mind and soul were devoured by the Old Gods from the onset, and in this final hour the former Earth-Warder of the titans has become the ultimate weapon for the Old Gods to unleash.[5]

Deathwing's attempt at fulfilling the Hour of Twilight was finally stopped when he was vanquished at the Maelstrom by the Dragon Aspects, Thrall and mortal champions of the Horde and the Alliance. However, this victory came at a great cost, with the dragonflights' losing the majority of their power and immortality, as they had, at last, fulfilled their ancient purpose.[6] 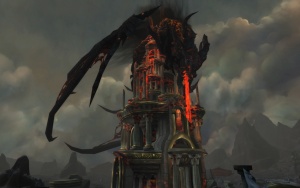 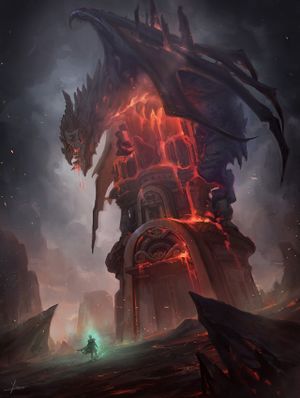 In Ysera's vision of the Hour of Twilight, all the five Aspects, including Deathwing himself, lay dead and broken at the ruins of the Wyrmrest Temple, having been destroyed by their own powers. Every lifeform on Azeroth will be dead and rotting, except twilight dragons.[7] This outcome was also a possible future if Thrall would not step in the place of Neltharion as the aspect of earth, and remained in the Horde instead of appointing Garrosh as his replacement.[8]

Murozond states in End Time that he has seen the "true End Time", worse than what is seen in the instance, and that the Hour of Twilight was simply a blessing the world cannot comprehend. This leaves the question as to what Murozond is referring to, but since he was once Nozdormu it is not surprising that Murozond would be able to travel through time to different possible outcomes to see this true End Time. As to why Nozdormu never mentions this true End Time is a mystery. Murozond may be lying. This concept may also explain the discrepancy between Ysera's vision and what players encounter.

In the End Time instance, the future and maddened self of Nozdormu states that he has "witnessed the True End Time", and proclaims that the dead and empty world the adventurers see is "a blessing you simply can not comprehend". When he is eventually slain by the adventurers with the aid of his former and still sane self, Murozond's final words are: "Aman'Thul... What I... have... seen...".

These strange remarks suggest that Murozond is the consequence of Nozdormu eventually bearing witness to something he has yet to have witnessed in the present, and that the End Time the adventurers journey to is in fact a time pocket that Murozond and his Infinite Dragonflight weaved to be able to escape or at least hide from this "True End Time".

Since the End Time that Nozdormu/Murozond hides himself in already portrays the apocalypse having come to pass, it raises the very disturbing question as to what the Great Aspect of Time could possibly have seen beyond the end of the world that instilled such terror in him it forever pushed him over the brink of insanity.

Even with Deathwing's demise, the Old Gods may still be plotting another way of achieving their ultimate goal, suggesting that the Hour of Twilight was only delayed and not truly stopped. The further proof to this claim is The Blank Scroll short story, where Garrosh Hellscream--fueled by the power of the Scroll--managed to destroy most bastions of resistance against his goal to gain Orcish supremacy over the world. For a time they ruled, and then the apocalypse occurred; caused either by the Legion or the Naga and the Faceless ones (referred to as "horrors from the sea") or maybe both, fighting a devastating war that ultimately destroyed Azeroth.[13]

[Vision of Time] questline (as well as the Mythic-only last phase of the final encounter with Garrosh Hellscream in the Siege of Orgrimmar raid). Kairoz, trying to push the Vision to its limits, requests an adventurer to find a most devastating timeway he can find. During the vision, faction leaders of both Horde and Alliance can be seen impaled, adorning the Stormwind Harbor, which is ruined by the Orcish siege as well as polluted with Y'Shaarj's essence.[14]

Not the true Hour of Twilight

It is possible that the alternate future that is Ny'alotha was what Nozdormu was trying to prevent.

It's possible that the true Hour of Twilight is not the resurfacing of the Old Gods on Azeroth, but the successful corruption of Azeroth's world-soul into an immensely powerful Dark Titan. The potential for a world-soul to be corrupted by the Void Lords was what drove Sargeras to begin the Burning Crusade,[15] with the goal of wiping out all life in the universe in order to prevent the Void Lords from corrupting it. Under the Void Lords' influence, Azeroth could be used as a tool for them to corrupt the universe, or as a source of power to use to fully manifest themselves into it.