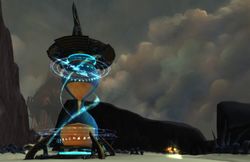 The Hourglass of Time

The Hourglass of Time was a powerful artifact created by Nozdormu to aid those who would fight and defeat his future corrupted self, Murozond.[1] It contains Sands of Time and has the ability to reverse time itself.[1] It was stolen by Murozond who trapped it within the End Time of Azeroth. By using the Hourglass of Time, Murozond interfered with Nozdormu's efforts to send adventurers to the past, preventing them from changing the bleak future Murozond resided within.

Kairoz later collected a few grains of the Sands of Time from this hourglass to create the Vision of Time,[1] leaving some animated sands in Nagrand. The status of the Hourglass of Time is currently unknown. 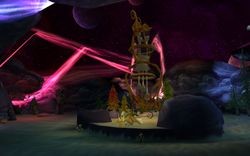 The sand clock in the Caverns of Time.

An hourglass, with six containers of sands of time,[2] can be seen in the Caverns of Time. It is currently unknown whether they are the same or not.[3] Murozond's encounter description states he stole the Hourglass of Time, probably from the Caverns if the two are the same.