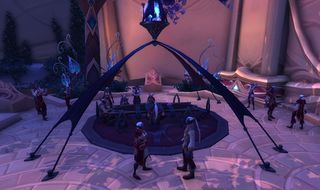 The nobility of House Astravar

House Astravar is a noble house residing in the nightborne capital of Suramar. Led by Lady Aurore Astravar, the house is one of the more influential of those within shal'dorei society, based from their Gilded Market mansion in the city's noble quarter. The Astravars have remained close political and personal allies of House Lunastre, making them one of the few noble houses sympathetic to the rebel cause during the Nightfallen rebellion.

Other members and staff

As the Nightfallen rebellion raged elsewhere throughout Suramar City, House Astravar remained relatively secure within the Noble District and their household seat within the Gilded Market. When the position of advisor to Grand Magistrix Elisande opened, the city's nobility fought for the role and House Astravar's support became pivotal.

Both Ly'leth of House Lunastre and Coryn of House Stelleris sought an alliance with Lady Aurore Astravar, though she would choose to turn down Corvyn. In response, House Stelleris kidnapped Aurore's son Ailen in order to coerce House Astravar into supporting their bid. Rebel agents secretly working for Ly'leth Lunastre would subsequently free Ailen from captivity by force and return him to his mother, who then pledged the full support of her house to Ly'leth's cause.[1]