House Proudmoore is one of four noble houses that rule Kul Tiras. Masters of the sea and commanders of Azeroth's finest navy, the distinguished Proudmoore family has led Kul Tiras for decades from their seat of power in Boralus.[1] Their seat is Proudmoore Keep, located in the city of Boralus. House Proudmoore rules Kul Tiras, commanding both the military and the guard in the form of the Proudmoore Admiralty[2] and the Proudmoore Guard. 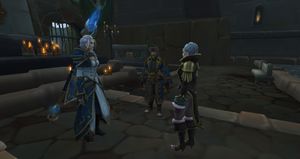 The Proudmoores reunited once again.

Finnall Goldensword was the alleged half-elf daughter of Daelin Proudmoore.

Raknahama Pi'Lenda was the Caretaker in charge of the remaining artifacts of the Proudmoore estate.

Rufus Montaine pledged himself to the Proudmoore family.[5]