A house cat is a small type of feline that is seen around some NPCs and most of which can be purchased as companions from Donni Anthania in the Elwynn Forest. One type can be purchased from Lil Timmy in Stormwind. After centuries of domestication, these furry critters inhabit nearly every human nation in the Eastern Kingdoms.[1] 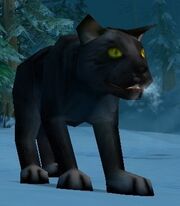 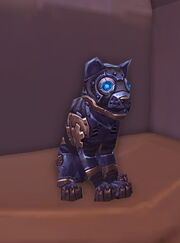 Many cats cross into the Emerald Dream on a regular basis. While their bodies sleep, their twitching paws and quivering whiskers signify they are quite active once they cross between planes.[2] Cats prefer to sneak up on their prey. The common housecat can climb, jump, and even balance well. They are able to hide well in areas of tall grass or heavy undergrowth. They are often found on temperate plains. Many are either domesticated or solitary.[3]