Hrothgar's Landing is a small island located off the northern coast of Icecrown, in Northrend.

Players who have risen in the ranks of the Argent Tournament and awarded the title of <Crusader> by the Argent Crusade are directed to the island with a new series of quests surrounding the kvaldir's taking of the island from the tuskarr.

It was formerly home to a tuskarr village until it was conquered by Drottinn Hrothgar and his kvaldir, who renamed it "Hrothgar's Landing".[1] The island then became a mist-shrouded staging point from which the kvaldir, or "sea vrykul" as they are often known as, staged attacks against the Silver Covenant and the Sunreavers' ships in the waters between the island and Icecrown.[2] 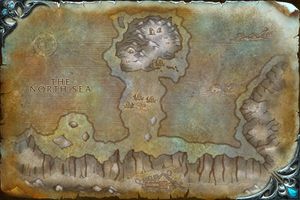 Since the slain tuskarr on the island are called Slain Tualiq Villager, "Tualiq" is most likely the former name of the island, the village, or both.