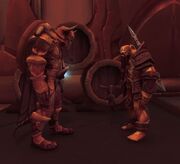 Magnar and Hruthnir in Skyhold.

Hruthnir is a member of the Valarjar and the son of the legendary vrykul king Magnar Icebreaker. Both Magnar and Hruthnir were betrayed and killed by servants of Helya during the Battle of Suramar Pass, and while Hruthnir was taken to the Halls of Valor by Odyn, Magnar's spirit languished alongside his body where it was buried in the Tomb of the Old Kings on Shield's Rest.

Odyn sends Hruthnir and his new champion — a mortal warrior adventurer — to Shield's Rest both to retrieve Magnar's spirit and bring it to the Halls of Valor as well as to obtain Magnar's famous Blackwyrm Armaments. After fighting their way through a group of undead and a minor Burning Legion incursion led by Pillik, Hruthnir and the adventurer enter the Tomb of the Old Kings to find that Magnar's ghostly servants are hostile to them and do not recognize their king's son, causing Hruthnir to comment that they have been "infected" by his father's madness. In the Tomb of the Icebreaker, Hruthnir and the champion find Magnar, still raging at Helya and her "cowardly followers". Initially, Magnar does not recognize his son, but after a long battle Hruthnir manages to convince his father to come with him to the Halls of Valor. Magnar grants his shield and sword to the adventurer before going with his son to become a Valarjar.[1]

Afterward, Hruthnir and Magnar can be found in Skyhold's Great Mead Hall.

Main article: Legacy of the Icebreaker#Notes