Hrydshal is a vrykul city[1] located in southern Stormheim. It serves as the traditional home for the Tideskorn clan, and specifically the Drekirjar, notorious for their taming of the local storm drakes. As the largest settlement in Stormheim, Hrydshal is a major feature in the region and contains one of the largest concentrations of vrykul on the Broken Isles. 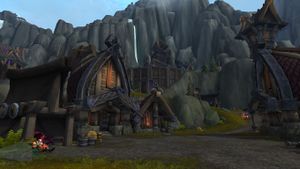 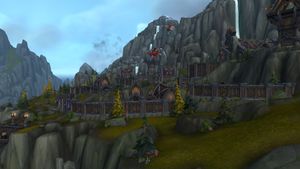 Storm drakes over the city 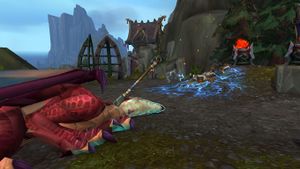 Destruction wrought by the Thorignir

Built into the cliffs at the foot of Thorim's Peak, Hrydshal is the largest settlement in the region of Stormheim, and one of the few possessing defensive walls. For many years, the Drekirjar who inhabit the city have practiced the skill of storm drake taming and riding. This era began with the exploits of Hakkap One-leg, who founded the tradition. It has become characteristic of Hrydshal, as drakes and their riders dominate much of the population.[2]

At the time of the third invasion of the Burning Legion, Hrydshal was ruled over by Thane Irglov the Merciless. Hrydshal's allegiance to the Tideskorn clan would ultimately align it to the Burning Legion itself, as God-King Skovald formed a dark pact with the demons. This placed the city at the center of the conflict taking over Stormheim and made it an important base for the Legion's loyalists. To his followers, Skovald presented a gift by transforming them into the Felskorn. The Drekirjar would subsequently betray their ancient pact with the Thorignir storm drakes, instead enslaving them to be used in the God-King's war.

Soon, however, agents of the Alliance and Horde would arrive in the area on their search for the Aegis of Aggramar. As part of this quest, they had to gain access to the roosts of the Thorignir high above Hrydshal, which meant going through the city. On the orders of Commander Lorna Crowley and Dread-Rider Cullen respectively, the Alliance and Horde infiltrated Hrydshal, using stormforged grapple launchers to bypass its formidable walls.[3] As they did so, they also sabotaged much of Hrydshal's defenses, including its complement of harpoon launchers, while cutting through many Tideskorn. The invaders would press on to Thorim's Peak in order to liberate the surviving Thorignir.

After the outsiders rescued the Thorignir and their matriarch from the Felskorn, Vethir would lead his kin in a blistering attack on Hrydshal in order to exact retribution. The attack would slay many Drekirjar and do serious damage to the settlement. Not content with this alone, Vethir's Thorignir would launch many subsequent assaults, with major casualties for the denizens of Hrydshal.[4]

At this time, the vrykul of Hrydshal would continue their practice of raiding into the neighboring region of Highmountain, home to the Highmountain Tribe of tauren. These attacks would often capture many prisoners, and these were taken back to Hrydshal itself to be imprisoned in public cages. The mythical vrykul known as Vydhar would eventually send champions to liberate these prisoners, in order to fulfill an ancient debt to the Highmountain tauren.[5]

Some time later, following the Burning Legion's initial failure to secure Stormheim, Hrydshal and the Drekirjar came under the leadership of Jarl Velbrand. Velbrand would eventually be confronted by Sigryn, daughter of Skovald, as she sought to claim her right to rule the Tideskorn. She would engage the Jarl in combat, and upon besting him secured his allegiance to her cause.[6] Sigryn would later be crowned the new God-Queen of the Tideskorn clan, thus placing Hrydshal under her overall authority.