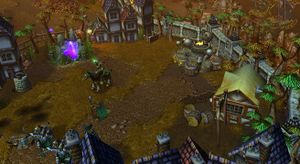 The Human Settlers were led by Dagren the Orcslayer. Under Admiral Proudmoore's command they sailed to Kalimdor and soon established an outpost in order to combat the Horde and locate Jaina Proudmoore.

After attacking Kul Tiras forces were repelled from their attacks on Horde holdings in Durotar and the Echo Isles, Warchief Thrall instructed Rexxar to deliver his parlay letter to Jaina in order to "account for this madness." However the base the Human Settlers constructed was preventing Rexxar and his companions from doing their job. Luckily for the Horde the orc Blademaster Samuro was successfully able to sneak his way inside the base and place demolition charges near vital structures of the Human Settlers base to provide a distraction. With the charges going off, Rexxar and his allies were able to sneak their way through to meet with Jaina.

Between the time Rexxar set sail and returned to the base with Jaina (who revealed she had never broken her pact and demanded to see the base that Rexxar had to sneak past) the Human Settlers were attacked by a group of naga led by Scilla Murkshadow and Lady Darkscale. By the time Jaina and company arrived the base had been razed and the survivors taken prisoner. The unlikely group seeking answers hunted the naga down in order locate any possible survivors. It was after the death of Lady Darkscale that Jaina had found the last survivor of the Human Settlers, who with his dying breath remarked that the Admiral would be overjoyed that she was found at last.[1]

The Human Armada was the name given to the naval army of the Settlers. The ships protected the channel between Theramore Isle and Dustwallow Marsh.

As the Coastal Base was staffed by veteran Footmen, riflemen, knights and mortar teams, and that Dagren the Orcslayer was last seen fighting in Lordaeron, it seems the faction was composed of veterans who fought the Undead Scourge and were rescued by Admiral Proudmoore before his departure.