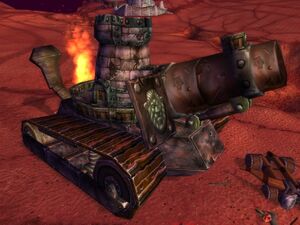 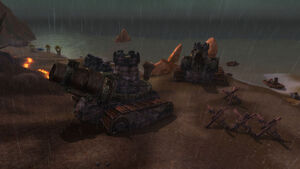 Human cannons, also known as Alliance cannons and, in the model files, human tanks, are siege weapons used by Honor Hold to fight Thrallmar, and the Fel Horde of Hellfire Citadel. They can be seen on the opposite side of the Path of Glory from the Horde's blade throwers, and in the wreckage in front of the Black Temple. Human cannons look like human towers, but with a large cannon in front, and a long exhaust pipe in back, set on top of tank treads. They were likely created by the Alliance Expedition after the Dark Portal was closed. Members of the Horde are tasked with burning them in

Some were also used in the lost battle at the Broken Front in Icecrown. Years later, several units of smaller size were deployed on the shores of Tirisfal Glades by the Alliance for the Battle for Lordaeron.