Not to be confused with Trueshot Point.

Trueshot Lodge is the home base of an ancient order of hunters known as the Unseen Path. The Lodge was originally built by night elves and tauren working together on Talon Peak in Highmountain. It serves as the order hall for hunters.

Talon Peak was known by another name that has not been mentioned. The site was blessed by Ohn'ahra herself through

[Talonclaw] and thus inspired the change. 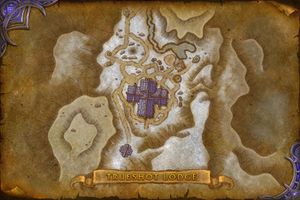 The map of Trueshot Lodge

Tales of the Hunt

A large book located at the east side of the lodge. This tome starts blank, but will grow to hold the lore, history and powers of the hunter artifacts as the player funnels order hall resources into it. Every two work orders provides a new page in the tome. Holt Thunderhorn is the artifact researcher.

Altar of the Eternal Hunt

The Artifact Forge is prominently located inside the lodge. It allows players to upgrade their artifact as well as change its appearance. Altar Keeper Biehn can refund artifact power.

The watchtowers of Talon Peak: the south tower, north tower, and northeast tower. Originally constructed as traditional night elf stone towers, only the south tower has survived the centuries intact. The other two were apparently damaged beyond repair, and were instead replaced by the Highmountain tauren with the smaller, 'scaffold-style' towers that they use. 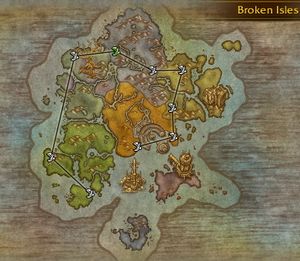 As the new leader of the Unseen Path, at Order Advancement Tier 2 the hero can gain access to a network of Great Eagles which connects all the regions with a great eagle nesting site. 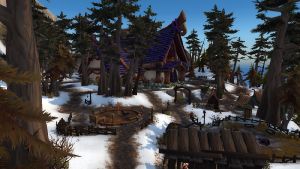