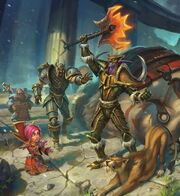 [Treant's Bane] from the Gordok Tribute. The warrior isn't too happy about it.

The term hunter weapon or hunter loot jokingly refers to the idea that nearly any weapon in the game that seems remotely useful to a hunter is a "hunter weapon", particularly melee weapons that are better suited for warriors or rogues.

For much of WoW's history, hunters shared gear with many other classes and benefited from many different stats, making their itemization more complicated than for other classes. Prior to patch 5.0.4, several classes—including hunters—carried both a ranged and melee weapon at the same time, with hunters being able to dual wield daggers, axes, and swords as well as equip two-handed swords, polearms, axes, and staves as "stat sticks". They gained ranged attack power from both strength and agility, and some abilities such as

This led to some hunter players laying claim to a wide variety of weapons as "hunter weapons", which quickly escalated to calling any weapon or even non-weapons "hunter weapon" as sarcasm. With the simplification of stats in patch 4.0.1 and the changes to the class in 5.0.4, which removed the ability for hunters to equip a melee weapon in addition to their ranged weapon, the need for conflict over melee weapons was removed. While Survival hunters were changed to use melee weapons in patch 7.0.3, changes to how primary stats work and the various loot systems in place means that "hunter weapon" loot debates are now unlikely to occur.