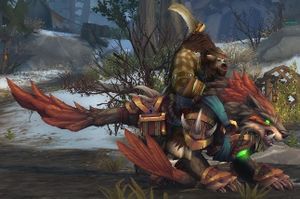 This mount is a reward from

Likely in the event that the mount is not rewarded as designed, a corresponding item also exists so the mount can be given through alternate means, like being mailed to the player from a Game Master:

[Trust of a Loyal Wolfhawk].

The Night of the Wilds is a celebration that occurs every year. Created by Odyn, he invited the greatest hunter of his choosing to go out in the Fields of the Eternal Hunt and slay the beasts of legend.

This year, due to everything that has happened with God-King Skovald, Odyn decides to invite the Huntmaster for the feast and chose him as his representative.

At the Broken Shore, Nimi Brightcastle informs the hunter that a seal letter for him arrived at the lodge. The hunter immediately goes back to the lodge and opens it. After reading its contains, a Herald of Odyn takes the Huntmaster to the Fields of the Eternal Hunt. There he finds Odyn, greeting him on the spot.

After the Huntmaster fills his stomach, he goes out in the wild to hunt the beasts. Using his abilities, he is able to find and kill Garos, Ketlingr, Habrok and Hyrtir.

This is where the night would have ended, but the great spirits were impressed but the Huntmaster. Vetholnir and Fereki challenge the Huntmaster to hunt them down. He succeeds, but it is not over.

Haukenulfnir, an ancient spirit who hasn't appeared in a long time appears. It sense the Huntmaster's predatory prowess and kinship with beasts and decides to test his skills. Like the beasts before it Haukenulfnir, gives its blessing to the Huntmaster. The Huntmaster was now able to call on her children when he needs them.

Returning back to the camp, the Huntmaster celebrates with Odyn before passing out.

When he woke up, the Huntmaster finds an empty saddle at the lodge. Knowing what to do, the Huntmaster calls for the beast to send one of its children as he is celebrated among his kin.

The spirit of the Great Hunter found you worthy, and now its children will answer your call forevermore.