A Huntress in Warcraft III.

Huntresses are the elite cadre of the night elf Sentinel army. Drawing their strength from the moon goddess, Elune, these warrior women ride the feral nightsaber panthers into battle. Huntresses are strong and swift, and merciless to those who would defile the sanctity of Ashenvale Forest.[1]

The night elf huntress is a mounted warrior. Like all night elf women, huntresses are able to

[Shadowmeld] at night. Huntresses also have a close bond with the owls of the forest. These owls relay information and spy for the Sentinel army.

Huntresses are the elite of Sentinels with millennia of expertise and experience. They serve as officers,[2] adjutants to Priestess of the Moon and as scouts. Leading sentinel squads to battle, protecting the priestesses or doing reconnaissance with the help of their owl companions. When heading to battle huntresses most often prefer to be at back of their loyal nightsabers and carry a glaive or a lance and a shield to combat,[3] making a ferocious foe for anyone who tempts the wrath of night elves.

Notably, they participated in the Third War led by Tyrande Whisperwind and in the Ashenvale wars under the command of Denea and Su'ura Swiftarrow.

Except for the night elves, they are also found in the ranks of the nightborne. 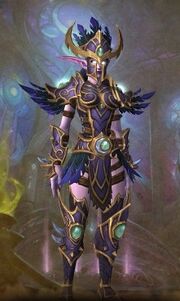 Night elf women are trained in stealth and combat. Many fight to protect their homes, their lands and their people. At the forefront of this army ride the huntresses. This elite cadre calls upon the moon goddess Elune for strength. Huntresses ride their fearsome nightsaber panthers into battle and wield moon glaives with deadly accuracy. In times of peace, the huntresses protect night elf lands from trespassers. In times of war, however, they extend their activities to anyone foolish enough to attack their people or their allies. These women are tall and lean, lithe like the cats they ride and so dusk-skinned their purple flesh blends into their panthers' fur, making them seem almost single beasts intent upon slaughter. They wear light armor designed for mobility as much as strength, and each wields a moon glaive that flashes in the night. The huntress is a warrior, first and foremost. She takes the fight to her foes, charging close to the enemy before flinging her moon glaive. The panther's speed and agility allow her to attack quickly, and she often dispatches her first foe with a single toss, spreading terror and panic among those nearby.[4]