Not to be confused with Houndmaster Leopold.

Huntsman Leopold is a level 42 undead now located in Tyr's Hand. He was formerly a level 60 elite quest giver at Light's Hope Chapel who would build the Cryptstalker Armor. 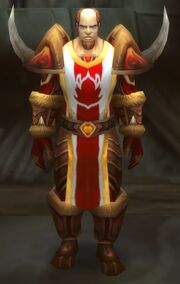 When he was alive.

Leopold is the shrewder brother of Houndmaster Loksey, one of the leaders of the Scarlet Monastery. He was sent to Light's Hope (though, as Leopold himself states, Loksey was almost sent instead) as part of the Scarlet Crusade's reluctant alliance with the Argent Dawn. Leopold is of the opinion that Loksey can't even take care of his own hounds, much less represent the Crusade - which is probably why Leopold was sent instead.

After the Cataclysm, he somehow became undead and relocated to Tyr's Hand where he is targeted by the Brotherhood of the Light.

They almost sent my brother, Loksey, to this gathering. He cannot even take care of his hounds, let alone represent the Scarlet Crusade in a competent manner.

Where can I find crypt fiend parts, Leopold?

Those filthy beasts are all over the place.

If you prefer hunting outdoors, you'll find most of them around Plaguewood and Terrordale, with a good concentration of them in the Terrorweb tunnel. They are also likely to appear at almost any Scourge encampment in the Eastern Plaguelands.

If you're a hearty dungeon crawler, you'll find a good lot of them in Stratholme and a few of the necrofiend variety in Scholomance.