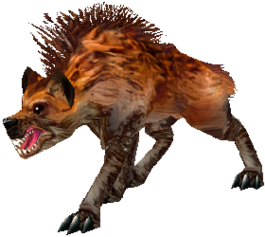 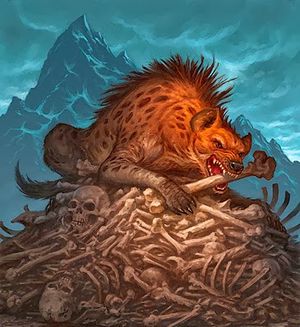 A hyena in the TCG.

Hyenas are large carnivorous beasts found in the most barren areas of Kalimdor. They are most dangerous when traveling in packs. Rotting corpses attract hyenas and from feeding on the dead they often have an ability to inflict dangerous diseases on those who fight them.[1] Hyenas possess tremendous strength in their jowls.[2]

Centaur hunters in the Barrens and Desolace often keep them as pets, while they also serve as mounts for Uldum's desert pygmies and Vol'dun's vulpera. Hyenas are skinnable. They are found in the Barrens, Desolace, Tanaris, Blasted Lands, Dragonblight, Uldum, Townlong Steppes, and Vol'dun.

Hyenas are a family of Ferocity pets and are tamable by a Hunter starting at level 12. Hyenas, through the use of their special ability

[Tendon Rip], increases damage taken from bleed effects by 30% for 15 sec. This is great in a PvE setting when

[Blood Frenzy] is not present. There are eight different skins available for hyena pets. While hyenas have a snaring ability, they are generally unpopular among hunters compared to stat-buffing wolves. 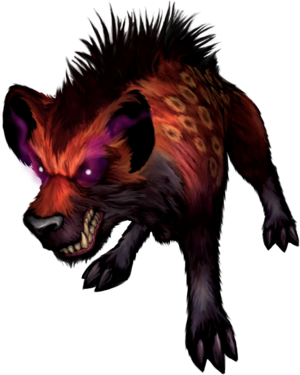 Hyenas are pack hunters infamous for their cunning and their unnerving vocalizations. A favorite tactic is to send a few individuals against the foe’s front while the rest of the pack circles and attacks from the flanks or rear.[3] The striped hyena is about 3 feet long and weighs about 120 pounds.[3]

Dire hyenas are large hyenas. They are massive, striped animals with slavering jaws. They are known to throw their heads back and scream with an hysterical-seeming laugh. Dire hyenas chase both lions and their smaller cousins away from prey; hunting in packs, they are particularly dangerous. Dire hyenas are about 8 feet long and 5 feet high, and weigh more than 800 pounds. A dire hyena pack often sends in a few of its members to harass prey while the rest of the pack circles for position. During this delaying action, the foremost hyenas fight defensively; when the full pack is in position it charges as a unit.[4]

Substituted by mastiffs as attack animals of the Scarlet Crusade and Onslaught.