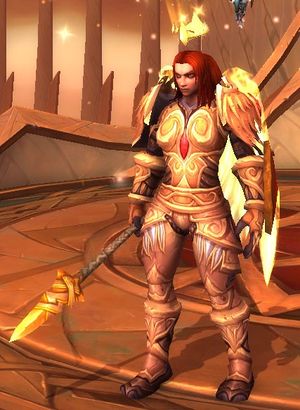 Hyrja is a val'kyr located in the Halls of Valor. Her transformation into a val'kyr was witnessed by the class orders after they finished fighting Olmyr and Solsten. She was later seen during the Trial of Valor, where she stood alongside Hymdall as a bodyguard to Odyn, and she was present in Helheim when Helya was killed.

In life Hyrja was a warrior without equal, defending the Valkyra from all threats. Her valor and courage drew the attention of Eyir, a titan watcher. Upon her death and ascension to the Halls of Valor Eyir has awarded Hyrja with her greatest honor, transformation into a Val'kyr.

Hyrja becomes empowered by Olmyr the Enlightened and Solsten depending upon which mystic she is closest to. As she becomes empowered she is granted particular abilities that grow in power over time. Moving Hyrja out of range of a mystic slowly reduces that mystic's empowerment.

It is important to swap Hyrja between Olmyr and Solsten every so often so her damage does not become increasingly high, if not in range of either Mystic she will gain stacks of each Mystical Empowerment. At higher gear levels it is possible to ignore the swapping mechanic and burn her down straightforward without dragging her to each Mystic.

Hyrja will use Shield of Light in addition to whatever Mystical Empowerment she has. She will target the tank and begin casting a straight beam attack that knocks players back if they're hit, do not stand in front of her when this is happening.

Empowered by Olmyr, she will cast Expel Light on one random target, the target of Expel Light should run away from other players so they do not hurt. She will also channel Sanctify, small orbs of light move out in a straight line from her location and should be dodged, as getting hurt by one also damages everyone in the group.

Empowered by Solsten, she will cast Arcing Bolt on random targets, this is a chain lightning spell, so everyone except melee should be spread so Arcing Bolt does not chain. She will also cast Eye of the Storm and begin channeling a room-wide thunderstorm, there will also be a large protective bubble at her feet, stay inside and continuing dpsing/healing will the storm continues. Range spread out immediately as she will usually use Arcing Bolt a few seconds afterwards.

Intro
Eyir says: Through great deeds of courage and valor, Hyrja has earned this most sacred of rites. She shall ascend as one of my chosen val'kyr, and her name shall echo in these gilded halls for all eternity.
Olmyr the Enlightened says: Are you nervous, Hyrja? It is understandable if-
Hyrja says: I am not nervous. Only... excited. All my life has led to this one glorious moment.
Solsten says: Spoken like a true val'kyr.
Olmyr the Enlightened says: Mortal intruders approach!
Eyir says: I witnessed their deeds in Stormheim. Their kind has no true honor. No true virtue.
Hyrja says: I will purge them from these sacred halls myself!
Eyir says: The ritual is not yet complete.

Aggro
You will not deny Hyrja's ascendance!

Defeated
The Light shines eternal in you, Hyrja!

Aggro
You sully this ritual with your presence, mortals!

Defeated
Hyrja... the fury of the storm is yours to command!

Eye of the Storm

Aggro
I will not fail you, Eyir!

Wipe
It is done, Eyir! The sanctity of this place is preserved.

Outro (if beaten after Fenryr)
Odyn says: You have earned my blessing champions! I look forward to meeting you within the Hall of Glory!

Unused quote
Eyir: I... remember their kind. They and one of their cursed leaders sought to enslave me in Stormheim.