"It's hard to nail a moving target. An immobile one, though... now that's a different story." - Velindra Sepulchre [1]

Ice Lance is a level 10 Frost mage spell that deals Frost direct damage. The spell can be powerful due to the fact that it deals triple damage to targets that are frozen.

The double bonus on frozen targets is applied after all spell damage, talents and other modifiers have been calculated. 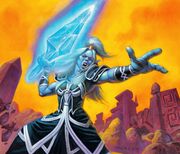 Ice Lance is a great source of burst DPS in solo, PvP and some group situations. It is useful in any situation where an enemy can be frozen, which makes it less useful on most dungeon bosses. Since the triple damage bonus is applied after all other flat modifiers such as spell power effects, the burst damage can get pretty high.

Ice Lance is one of the very few offensive mage abilities that can be used while moving, and the fact that it has no cooldown other than the global cooldown means that it can be spammed repeatedly. Interestingly, it is possible to use Ice Lance to make a "fighting retreat" so to speak and use it on foes directly behind the mage's path of movement. The trick is to face perpendicular to the target that you wish to flee from, and side-step out of the way. Thus if you face left with the target to your left, move to your right, and if you face right with the target to your right, move to your left. The actual targeting arc for spells and abilities is one-hundred and eighty degrees in front of a character, so by "torso twisting" in this manner a mage can run away at full speed while still showering the foe with Ice Lance attacks.

Summon your minion. From a decent range (~20y), target your enemy and begin casting your

[Frostbolt]. While Frostbolt is casting, use the minion's Freeze on your enemy, and immediately when Frostbolt is done casting start spamming Ice Lance. Because of the distance and travel time, Frostbolt and Ice Lance should hit at the same time and both crit, leading to high burst damage.

On non-frozen targets, the spell is a useful instant that costs very little mana. Unlike wanding, Ice Lance can be cast while running. In PvP, use it to take down shaman totems or to interrupt flag captures in battlegrounds.