An ice elemental in World of Warcraft.

An ice elemental is a type of frozen water elemental.

The ice elementals surrounding the Frozen Glade were once companions to the local frost nymphs, but a volatile and destructive force swept through the land and turned them against the nymphs.[1] 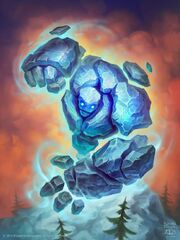 A Glacial Shard in Hearthstone.

[Ice Chip] has a small chance to drop from the

[Satchel of Chilled Goods] during the Midsummer Fire Festival.

Ice elementals originate from Frostland. They speak the Auran and Aquan dialects of Kalimag.[2] Ice elementals are apparently in the service of Neptulon.

The shape of an ice elemental looks like an ice sculpture of a vaguely humanoid form coated in snow. It whirls into shards of ice upon the winds, as if hungrily, body heat alone can melt its shimmering crystals.[3]