“It was in Icecrown that the ensorcelled diamond-hard ice containing the armored form of Ner'zhul crashed and became the Frozen Throne. It was also here that the death knight Arthas shattered the throne and merged with his former master. Now, from within the brooding Icecrown Citadel, the Lich King commands his undead Scourge to scour the world of all life.”

Icecrown, also known as Ice Crown[1], is a region composed of mostly Icecrown Glacier and the immediate area around it. Icecrown is surrounded by mountains. The ground is heavily desecrated, frozen earth that resembles solid, black ice. Thus little can grow here.

Icecrown is an anchor that holds this world to the next.[2]

The name of Icecrown became infamous when Kil'jaeden hurled the Lich King back into the mortal world. Ner'zhul's prison slammed into the glacier and created the Frozen Throne. The impact was seen as far away as the Grizzly Hills. Here the Lich King remained until freed by Arthas, and the two beings merged into Arthas' body. From the Icecrown Citadel, he commands the Scourge.

Apparently, troops of the Scarlet Crusade succeeded in approaching the stronghold during a counter offensive, but in the end were repelled by the Scourge. Orman of Stromgarde was the highest-ranking human among the countless casualties of this failed assault.

In World of Warcraft: Wrath of the Lich King, Icecrown, previously ravaged by the tremendous force unleashed when Arthas and the Lich King merged into a single being, has been heavily fortified by the Scourge. Massive walls and ramparts have been erected throughout the region and Angrathar the Wrathgate bars entry from the bordering Dragonblight, while the reconstructed Icecrown Citadel looms overhead. The glacier itself is protected by three gates: Mord'rethar, Aldur'thar and Corp'rethar. 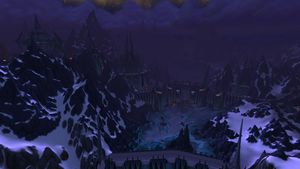 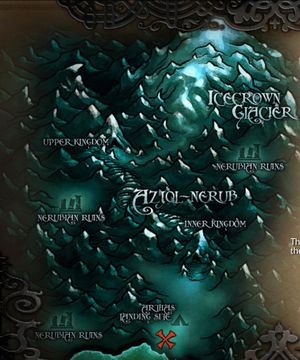 Icecrown Glacier on the The Frozen Throne Northrend map.

The obelisks around the Frozen Throne were guarded by ice revenants, and were hostile to all comers, including the Scourge. A small group of tuskarr could be found nearby. The area is notably forested, with significant amounts of meltwater.[4]

A melee map named Ice Crown exists. It uses the Northrend tileset and has the following description: These frozen woods are haunted by souls in torment, enslaved by the dark magic of the Undead.

Icecrown Glacier, like the name implies, is a glacier that most likely ran into Northrend centuries ago or longer and got stuck. Somewhere beneath this ice is the real northwest corner of the continent. It is not known how far it extends — possibly it could go all the way to the shoreline or be just beyond the end of Crystalsong Forest. Everything here is not frozen soil or snow-covered forest, it is all ice. Nothing grows and nothing lives here. Only a few penguins and walruses and other arctic sea creatures might use the shore as a resting place but that is about it. What surely does have is a lot of undead. It is the Lich King's domain and he rules from center of his power in Icecrown Citadel. Travelers learned to avoid the place.[5][6]

Before the Lich King's reign, this region was the capital of Azjol-Nerub, the nerubian spider kingdom. Then Ner'zhul arrived, and he used his magic to draw many dead and dying creatures onto the glacier and into his army. He conquered the nerubians and built his undead Scourge.[6]

Still, you have to give the Lich King credit. He landed in the coldest part of the coldest continent on Azeroth and figured out a way to get loyal, hardworking servants. Undead don't feel cold nor they need food or drink. They don't breathe and neither get distracted or lazy or bored. It is no wonder he managed to build his citadel in a few years when it would have taken even a dwarven team decades. All his servants do exactly what he commands, for as long as he requires.[5]

The glacier has seen its share of battle within the past few decades: the Scourge fighting and destroying nerubians, furbolgs and Drakkari; Arthas Menethil and Illidan Stormrage fighting for the right to open the Frozen Throne's chamber. Many consider the glacier the most evil place in all Azeroth. More than one adventurer has sneaked onto Icecrown Glacier, trying to kill the Lich King and destroy the Scourge. None return.[6]

Nothing lives here, but the Lich King and his Scourge are not exactly "alive". The glacier teems with undead creatures and it is possible more creatures inhabit this one region than the entire rest of the continent, although that is simple speculation. All of the beings here are undead, which makes it a really awful place to visit.[5] 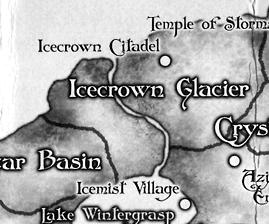 Map of Icecrown Glacier in Lands of Mystery.

Describing the glacier is easy: ice. That about covers it. Literally. A sheet of ice, several feet thick even at the edges, coats the entire region. A river cuts down through it, from the upper corner to Lake Wintergrasp below, and much of that is frozen over as well, at least on the surface. Along the southern edges a few stunted trees cling to survival but that is where the glacier ends and real soil begins again.

The glacier is not flat, though. It has levels, some of them gentle hills and valleys and others abrupt tears and sudden cliffs. The banks of the river drop sharply to the water, too high and steep for anyone caught in the waters to climb back out.[5]

Just like the Howling Fjord, Icecrown Glacier has only one real settlement. Unlike the Fjord, the glacier has no exceptions. Icecrown Citadel teems with Scourge forces, and undead wander the landscape on missions for their cursed leader.[6]