Icecrown Citadel is the greatest fortress of the Scourge and the last bastion of the dread Lich King. Located in the frozen wastes of Icecrown on the continent of Northrend, the Citadel is built around the Frozen Throne that once held the spirit of Ner'zhul until he joined with Arthas Menethil to become the new Lich King. Constructed from saronite, the Citadel is inhabited by some of the strongest and vilest of the Lich King's minions - a great army of the living dead standing between their dark master and those who seek to destroy him. 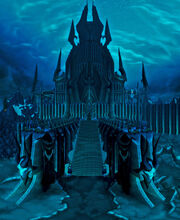 Icecrown Citadel dominates Northrend - visible from farther away than nearly any other structure and home to the greatest army of undead in the known world. Inside dwells the Lich King - a tyrant with nearly godlike power over his tireless, seemingly infinite subjects - and the will to bring Azeroth to its knees.

An assault on the mighty citadel is among the most dangerous undertakings in the history of Azeroth - and the most pivotal. The legendary heroes Highlord Tirion Fordring of the Argent Crusade and Highlord Darion Mograine have joined forces to lead the charge through Icecrown's fortified gates, and both the Horde and Alliance have sacrificed lives - indeed, whole battalions - to get this far. They dare not fail. The Lich King's reign must end.[4]

Icecrown Citadel is a massive structure located on the Dragonblight-Icecrown border. Its southern entrance, Angrathar the Wrathgate, is surrounded by the Court of Skulls, and flanked by Fordragon Hold and Kor'kron Vanguard. The fortified northern entrance to Icecrown Citadel, surrounded by the Court of Bones, is found in the mountains of southern Icecrown. It is surrounded by gigantic ramparts and massive, blade-like spires, the towers are an imposing landmark of the Icecrown skyline, emitting a beacon of light from its pinnacle.

Icecrown Citadel is home to the final encounter in Wrath of the Lich King, featuring the Lich King as the final boss. Although players interact with Arthas numerous times during the expansion, including during an event at Angrathar the Wrathgate in the Dragonblight, the instance where the final battle against him will take place was not formally announced until nearly a year after the release of the expansion. The developers have stated that they feel it was a mistake to release Black Temple, wherein the Illidan encounter takes place, as soon as they did (a mere four months after the release of Burning Crusade). Their goal for Wrath of the Lich King was to ensure that Arthas did not become just another farm boss too soon before newer, more challenging content is released.[5]

Icecrown Citadel received an exterior redesign in patch 3.3.0, with the opening of the raid instance inside; the central spire became much taller and more cylindrical, and a platform of ice was added at the spire's summit (where the Frozen Throne will be inside the instance).

Several adventurers entered the halls of Icecrown in search of mighty weapons to fight the Burning Legion with.

The sky above Icecrown Citadel opens up into the Shadowlands

After the defeat of the Lich King at Sylvanas Windrunner's hands, as announced by King Terenas years earlier, the now-masterless Scourge will be marauding all across Azeroth. Off the heels of yet another brutal war, the forces of Azeroth will have to mount a counterattack and assault the source at the Icecrown Citadel.[6]

From the name, one would assume Icecrown Citadel was an enormous fortress planted on the glacier, with thick walls, sturdy guard towers, and massive front gates. Not quite. Most of the Citadel lurks below the surface. The glacier is split, creating a deep fissure. Scourge forces lurk down there, and they have carved levels into either side of that massive split and created bridges, walkways and even solid floors across the gap. Not surprisingly, Icecrown Citadel is a cold, unforgiving place. It has no decorations, no furs or rugs, no fires, nothing to provide comfort or warmth. The Scourge creatures move silently from one problem to another, focused on their tasks. All manner of undead dwell here, including zombies, wraiths and beings composed of cold energy. At the bottom of the rift is the Frozen Throne, the heart of the Scourge and the Lich King's personal seat. This throne is the remains of the block of ice that first brought Ner'zhul to Azeroth, the same block that held him prisoner until Arthas freed the ancient orc shaman and merged with him. Arthas sits on the Frozen Throne.[7] 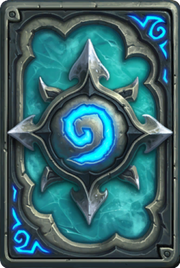 A card back themed after Icecrown Citadel in Hearthstone.