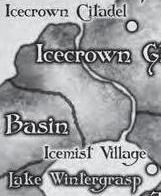 Icecrown River in Lands of Mystery.

Icecrown River is a freezing, often frozen river that cut across Icecrown Glacier from the upper corner to Lake Wintergrasp below, northwest to southeast. Much of the river is frozen over as well, at least on the surface. It is too wide to leap across and too fast and cold to swim, plus the banks drop sharply to the water, all along its length. They were too high, steep and slick, for anyone caught in the water to climb back out. It had no official name so Brann Bronzebeard named it Icecrown River.[1]

Although there is no river connecting Icecrown to Wintergrasp, it seems there was once a river that crossed the region to the southeast into Crystalsong Forest. This river was cut off by the Ironwall Dam in the border between the two regions and now the small flow of water empties into the Decrepit Flow, following the Twilight Rivulet and ending into a small lake called the Mirror of Twilight. It is also possible that if there was once a river between Icecrown and Lake Wintergrasp, it may no longer exist.