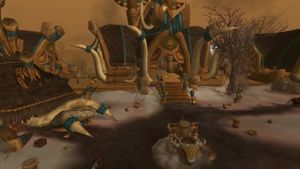 Icemist Village is located on the edge of Lake Wintergrasp within the Dragonblight. It is said the village was originally an Icemist tauren outpost, but it is unclear how long ago that was. Icemist Village then became the capital of the taunka.[1]

The ravaged settlement was destroyed by undead nerubians and is currently controlled by the Scourge forces out of Azjol Nerub. The Scourge here are led by Under-King Anub'et'kan whom must be killed during the

[72] Strength of Icemist quest chain, and the taunka chieftain, Roanauk Icemist, who is being imprisoned amongst the ruins of the village, must be freed in the same quest.

The village is the capital of the taunka. While there are many taunka villages throughout Northrend, including in the Borean Tundra, Grizzly Hills, and Howling Fjord, all tribes still answer to the high chief, Roanauk Icemist, who has become Icemist Village's most recent ruler. Recently, the village was attacked by the Scourge and brought into ruin. Some of the taunka were able to escape and were held in protective custody at the Westwind Refugee Camp on the western border of the Dragonblight.[1] Roanauk Icemist, however, was captured and remains in the ruins of the village.

Icemist Village in the shores of Lake Wintergrasp in Lands of Mystery.

A pack of Icemist tauren settled on the western edge of the Dragonblight, on the shores of Lake Wintergrasp. The only tauren settlement in the region, Icemist Village, is a pleasant enough town, surprisingly so given its setting, and the tauren there are friendly and helpful. Most travelers in Northrend stop there when passing in this direction, so you can always find someone with whom to trade or share information over a drink.

The tauren keep a ready supply of food, drink, clothes and basic tools, and sell them to anyone in need. They even give things away, if people are desperate, and some people has seen them drag in travelers they found collapsed on the lake or in the surrounding area. The tauren don't venture into the blight proper very often, preferring the clean cold of the lake to this bitter air of doom and death. Tundra Coldhoof oversees the village and she is a gentle soul who welcomes travelers to Icemist Village as they arrive, making sure the wounded and weary receive whatever care is necessary.[2]