Ichoron is a water revenant boss located in Violet Hold. If released, she is one of the first two bosses in the instance. The releases are random, so it is possible that you will not fight her. 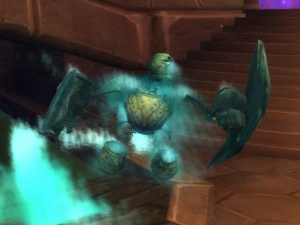 Ichoron in World of Warcraft.

A foolish apprentice summoned this revenant from the Elemental Plane, only to discover that disgruntled soldiers of the Old Gods make poor pets. Ichoron slew her would-be master and has rotted in the Violet Hold ever since, eager to wreak vengeance on her jailors.

Ichoron initially comes out with a "Protective Shield" buff with 35 charges that reduces any damage by 99%. Any attack or spell hit made on Ichoron will remove one charge. When all of the charges are gone, her shield will erupt, costing her 30% (170K on heroic) of her total health. The eruption will also knock nearby players back, causing damage. She will become untargetable and about ten low-health Ichor Globules will spawn around the room and move directly toward her. When a Globule reaches her or when there are no Globules left alive, she will become targetable again. This cycle will repeat: 35 Charges, Shield Eruption, Globules summoned.

Each Globule that reaches her once she is up will restore a small percentage of HP. Killing the Globules causes them to erupt, dealing damage and knocking back nearby players.

When she goes below 25% health (which is usually after three cycles) she will no longer have a shield or summon Globules, but will enrage, hitting hard. This final phase is a simple DPS race.

A good spot to tank Ichoron is up the stairs to the back of the platform by the entrance. This bottlenecks incoming Globules, making them much easier to AoE down and giving them farther to run. Another suitable spot is in the pool which Ichoron emerges from, as no Globules spawn there. These locations also work in combination with the Defense Control Crystals.

During the shield phase Ichoron is practically immune from damage. Tanks will want to focus on abilities that directly give aggro, and not depend on abilities that require damage done to gain aggro. DPS should use quick-hitting attacks, rather than slow attacks with high damage, as what counts in this phase is the number of attacks, not the damage done.

When the Globules spawn, they should be stopped from reaching Ichoron. Because they explode when they die, players should avoid being close to them. The Globules die easily, and can either be killed with the Defense Control Crystals or with DPS.

Using the crystals requires some coordination: one player should be assigned to activate a crystal at the right moment, and the other players should be aware that the crystals will be used. Activating a Defense Control Crystal after Ichoron's bubble pops will kill all Globules and, if timed right, can stop any from reaching her. The crystals are the key to the Heroic achievement

[Dehydration]. Note that using a crystal will cause all of the Globules to explode at the same time and can kill players if they are close to a group of Globules.

Using DPS requires a good tanking spot and well aimed, preferably ranged, AoE and other quick damage. The advantage is that it does not require any coordination, though players should still keep their distance from the Globules.

When Ichoron resurfaces (because a Globule reached her or all Globules were killed), the tank should pick her up again as quickly as possible.

The final phase is a straightforward tank and spank. Because there is no more shield, tanks can use their normal methods of holding aggro again.

Frost Resistance helps reducing the damage from the attacks by Ichoron.

Using a Defense Control Crystal will block the

[Defenseless] achievement in Heroic. This is no a great drawback, as players will have plenty of opportunities to get this achievement in runs that do not involve Ichoron.

Release
I... am fury... unrestrained!

Shattering
I will not be contained! Ngyah!!

Shield
Water can hold any form, take any shape... overcome any obstacle.

Enrage
I shall consume, decimate, devastate, and destroy! Yield now to the wrath of the pounding sea!

Ichoron appears as one of the bosses that can be encountered in the Dalaran Heist single-player experience in the Rise of Shadows expansion for Hearthstone.