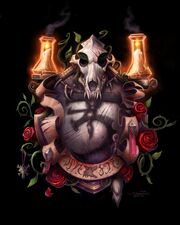 The Icon of Gilneas is the racial icon of the Gilnean worgen. It consists of a wooden shield, mauled by wolf claws, displaying a slightly modified version of the rune seen on the old Gilnean banner in the Warcraft II manual. On top of the shield rests a wolf skull and a tribal necklace. Flanking the shield are rose bushes and lanterns, common sights in Gilneas. A small wolf-head trinket hangs from one rose branch. A piece of a scroll containing an image of a wolf's head and some unknown writing is bolted to the shield.