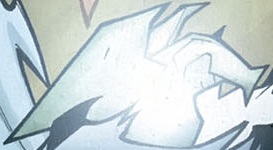 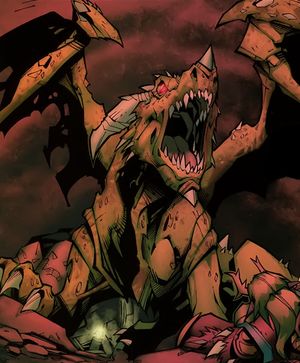 The dragon connected to the Idol

The Idol of Remulos was given to Broll Bearmantle by Remulos, to help Broll channel his druidic powers. The Idol is shaped like and connected to a green dragon, and connects Broll with the Emerald Dream.

During the Battle for Mount Hyjal, the pitlord Azgalor attacked Broll with fel energy. When Broll fell he dropped the idol, and it is said that Azgalor struck the idol with his sword, Spite, and infused it with fel energy. Broll's daughter, Anessa, tried to save Broll from the corrupting energies of the idol, but she was too late, the idol exploded and killed her instantly. After the battle Broll felt it was his fault that his daughter had died; his grief and fury caused the spirits of the wild to abandon him: the stag, the panther, the seal, and the crow. But one spirit remained with him, the spirit of the bear, corrupted by fel magic and feeding Broll's rage.

The corrupted Idol of Remulos was thought lost by Broll and the Druids. However, Broll found out at Warsong Gulch that the corrupted Idol had been retrieved by the Thistlefur furbolgs, corrupting them. For this matter, Broll and Lo'gosh flew with help of the hippogryph Sharptalon toward Thistlefur Hold in Ashenvale to cleanse the corrupted idol of its fel energies. They eventually succeeded in cleansing the idol, but only after battling the green dragon that was linked to the idol, and a horde of corrupted furbolgs. In cleansing the idol, Broll was able to once again commune with the other spirits of the wild and soothe his rage.

Broll and Lo'Gosh brought the idol to Fandral Staghelm, who wanted to make sure that it truly had been cleansed. After studying the idol, he decided that it would be best if Broll left the idol with him in Darnassus.

Fandral later attempted to use the idol to heal Teldrassil's various plights, only to be spurned by Remulos himself. Deciding the Idol would be integral to saving Malfurion Stormrage from the Nightmare Lord, Broll stole the Idol. After travelling with Tyrande Whisperwind and Lucan Foxblood, the three of them discovered that it was Eranikus who had loaned his power to craft the Idol.[1]