Il'gynoth, the Heart of Corruption is the second boss of the Emerald Nightmare, fought within a twisted nightmare version of Un'Goro Crater.

Il'gynoth is a tiny growth of the behemoth N'Zoth.[1]

Lodged in the hollows of a now-decrepit world tree, Il'gynoth is a manifestation of the horrors that lie at the heart of the Nightmare. It is a mass of corruption - a thing that should not be. Its tendrils seep through the ground, emerging in countless horrifying eyestalks and limbs.

Players begin the encounter fighting against Il'gynoth's erupting eyestalks and tentacles, while the monstrous Eye bars the way to the heart of the tree. Defeating these tentacles spawns animated Nightmare Ichor globules, which players can destroy near the Eye to damage it. Once the Eye is defeated, players can enter the hollow to damage Il'gynoth directly for a time, after which the Eye reforms to seal the entrance to the hollow once more, killing any players who remain inside. This repeats until players defeat Il'gynoth.

Stage One: The Ruined Ground 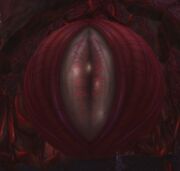 Players engage creatures of nightmare while the Eye of Il'gynoth watches over them, directing the forces of corruption.

Stage Two: The Heart of Corruption

When the Eye of Il'gynoth is destroyed, the chamber holding Il'gynoth's beating heart is revealed.

Entering Un'Goro
Malfurion Stormrage yells: What horror is this? A tumor of Nightmare infecting a world tree, here in the reflection of the Titans' own playground?
Malfurion Stormrage yells: If this seed takes hold, the roots of its infestation will wind their way into the heart of Azeroth. The Nightmare would devour our world, claiming everything... everyone. This must not come to pass!

Intro
A presence... Something new, yet... Familiar. Yes...
Your coming was foretold in the rings. The long circle is nearly complete.
Come, little ones. Savor your fear as we feast upon it!

Aggro
At last, the feeding hour.

Attacking Heart
Aaarg! Every blow struck at our heart will be repaid a thousand-fold!

Completing Dark Reconstitution
Out! Out! You are not yet worthy!

Outro
Malfurion Stormrage yells: No doubt Xavius and his ancient master delight that so much of our attention goes into fighting the Legion. Their insidious shadow seeps into our world, distracting us with whispers and doubts.
Malfurion Stormrage yells: I Pray that purging the Nightmare's corruption buys us enough time to defeat the Legion and catch our breath before the black armies rise up from the depths.

Unused quote
What pointless impudence, we share a master!