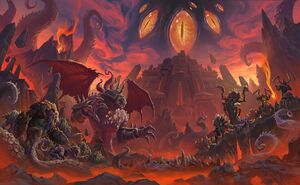 Il'gynoth, Corruption Reborn is a boss located in Ny'alotha, the Waking City.

Following its defeat in the Emerald Nightmare, Il'gynoth retreated into the depths of Ny'alotha to regain its strength. Now it has fused with the city's architecture and spreads across the Black Empire like a creeping infestation. As Il'gynoth's corrupting flesh grows ever larger, so does its power.

After defeat in the Emerald Nightmare, Il'gynoth retreated to the depths of Ny'alotha. Here, he has merged with the very architecture of N'Zoth's plane. Spreading like a malignant tumor, Il'gynoth's corruption continues to feed on everything he touches.